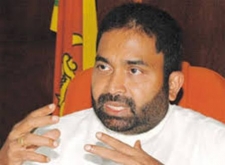 Minister of Power and Renewable Energy Ranjith Siyambalapitiya requests to curtail the duration of lighting the street lamps by one hour to save the power due to the prevailing dry weather.

According to the minister, if the prevailing dry weather condition continues, it would directly affect the power generation. But, plans are in place to continuously provide electricity. It would cost a huge amount. It is the Treasury but, not the Ceylon Electricity Board who will bear it.

“If we were able to save 50 MW it is a big victory. There are about one million street lamps. If they were switched off half an hour earlier in the morning and switched on half an hour later in the evening it will be big relief”, the minister added.