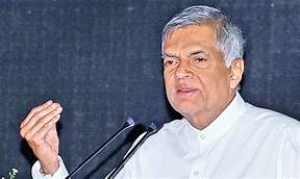 Last Tuesday, JVP leader Anura Kumara Dissanayake, under Standing Order 27/2 in reference to the agreement signed between the governments of Sri Lanka, India and Japan on May 28, questioned why the government signed the preliminary agreement of selling the Eastern Terminal of the Colombo Port to India and Japan disregarding the objections of the Port Authority, employees and trade unions. He questioned if the agreement is not a threat to the national security and the economic sovereignty of the country.

The Opposition attempts to take power misusing the aftermath of the Easter Sunday attacks, Development Strategies and International Trade Deputy Minister Nalin Bandara said. He was participating in the second reading debate on the Institute of Valuers of Sri Lanka (Amendment) Bill moved by Finance State Minister Eran Wickramaratne. Deputy Minister Bandara said the Opposition questioned why Muslim Ministers and State Ministers resigned. He said they did so to protect Rishad Bathuideen; they did so in support of the investigation into the allegations against them on the Easter Sunday attacks.

“Ven. Rathana Thera staged a fast and the Ministers resigned to prevent the Muslim people from having the blame of the consequences. He said Abdul Haleem’s surname is ‘Mohandiram Gedara’ “It reflects that he has connections with the Sinhalese,” Deputy Minister Bandara said. “Ninety nine informants who gave tip off to identify those assisted Saharan are Muslims. Some politicians attempt to turn this incident into a Black July to take petty political gains,” the Deputy Minister said.

“One MP said that Mahinda Rajapaksa had told that if Rishad was willing, he (Rajapaksa) was ready to accept him. “These are Political games,” Deputy Minister said. “It was the provincial Pohottuwa politicians who created these issues. They attempt to ignite racism,” he said.He said that although SLPP politicians went to temples more often now, they had not developed them. “The government, though, developed a high number of sacred places under the Gamperaliya Programme,” the Deputy Minister said.

Speaker Karu Jayasuriya announced that complaints against parliamentarians could be made before the Special Police Unit at the Police Head Quarters. The Speaker announced it in Parliament yesterday.He observed that according to a decision reached at the Parliamentary Business Committee on last Tuesday, any one could make complaints against MPs before the Special Unit.

The Mahanayake’s issued a statement calling on the Muslim political leaders to reassume their duties. They issued the statement to prevent the issue from getting out of hand, said Chief Opposition Whip MP Mahinda Amaraweera in Parliament yesterday. Amaraweera appealed to the Muslim leaders to meet the Mahanayakes and discuss matters to resolve all differences.

“We are very grateful to the Mahanayakes for inviting the Muslim leaders. We don’t want another extremist issue in this country, and we should not leave room for both Muslim and Sinhala extremism. What has happened is more than enough. I, therefore, urge the Muslim leaders to meet the Tamil and Sinhala leaders and discuss a mechanism where all people would be able to live in peace and harmony,” Amaraweera said.

Amendments to Valuers Act will not slash jobs – Eran

State Finance Minister Eran Wickramaratne said the proposed development work in the Institute of Valuers will not affect valuers’ jobs. He was participating in the second reading debate of the Valuers of Sri Lanka (Amendment) Bill in Parliament yesterday.

Referring to the media reports on the $ 480 million grant by the Millennium Challenge Corporation, he said that one part of the grant was for lands. He said $ 350 million will be spent on the transport sector and $ 67 million to obtain data regarding land ownerships and to complete the land inventory of seven districts. “The funds would be used to further strengthen the programme. The government will computerise the data system and the land registry,” the Deputy Minister said.

He said the employees do not have to fear losing their jobs. “We have to keep up with the advancements of the world and this does not mean that manpower is not required. Instead, it makes the system more efficient. It will also protect land owners,” he said.

State Minister Wickramaratne said investors will trust the country’s legal framework and will encourage them to invest with the new system. The balance $ 63 million would be used to enhance technology, he said.

“Therefore, the government valuers have no reasons to get alarmed. Today, they do not have to physically measure lands for valuation. With the technological advancement, it could be done from a distance,” the State Minister said.