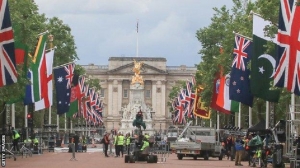 They will all play each other once in 50-over matches across 11 venues in England and Wales. The top four teams from the group stage advance to the semi-finals before the final at Lord’s on 14 July. There will be full commentary on every game on Test Match Special and the BBC Sport website will show in-play highlights.

Organisers say that 95% of 800,000 available tickets have been sold, adding it is believed a third of these ticket holders will be new to cricket. In addition, 150,000 tickets are held by women and children, while some 250,000 have been purchased by south east Asian fans.

Eoin Morgan led England in the 2015 World Cup in Australia Entering as the best team in the world is a remarkable turnaround for an England side that was knocked out in the first round four years ago. Their rise has largely been built on a powerful batting line-up – they have twice broken the record for the highest total made by a team in an ODI.

“The favourites tag is there for a reason,” Morgan told BBC Sport. “The level of performances that we’ve produced, particularly at home over the last two years in particular, probably lends itself to us being favourites.

“That might change throughout the tournament; we’ll more than likely come up against some difficult challenges and difficult games that we’ll lose and might have to come back from, but going into the tournament, it certainly sits fine with us.”

England’s dismal showing four years ago was in keeping with a miserable recent World Cup record. They reached the semi-finals in each of the first five tournaments and were runners-up on three occasions, but they have not won a single knockout game since their last final appearance in 1992.

In 1999, the last of the four previous World Cups to be held in the UK, they were knocked out in the first round. But, in perhaps the biggest cricketing summer this country has ever known, England will bid to regain the Ashes from Australia after the conclusion of the World Cup, with Morgan saying he was mindful of the opportunity to grow the sport.

He referred to the success of the England women, who won their version on home soil two years ago. “Cricket here is thriving, the women’s game is thriving,” said Dublin-born Morgan. “The impact of that World Cup was amazing.

“This World Cup won’t have as big an impact unless we go a long way, but it will still have an impact.

“We got knocked out early in 1999, but I still remember it like it was yesterday.”

Who might stop England?
Jos Buttler, Ben Stokes and Liam Plunkett
England, who regularly play football in their warm-ups, spoke with Gareth Southgate in the build-up to the World Cup
The schedule of the tournament is a revival of the format used in 1992, when nine teams all played each other before the semis and final.

The 10 participants make it the smallest competition in terms of teams taking part since 1992, and the decision to contract from a 14-team tournament four years ago was criticised for excluding some of cricket’s smaller nations.

Ireland are not playing in a World Cup for the first time since 2003, while Scotland missed out after a controversial defeat by West Indies in the qualifying competition.

However, the 10-team format does mean that most of the teams entering arrive with some prospect of lifting the trophy.

Australia have won four of the past five World Cups and are improving after a turbulent year which saw Steve Smith and David Warner banned for ball-tampering. Both batsmen have returned in time for this tournament.

India are ranked as the second best side in the world and in captain Virat Kohli have perhaps the greatest one-day batsman of all time.

Their fierce rivals Pakistan were beaten 4-0 by England in the series prior to the World Cup, but they won the Champions Trophy in the UK in 2017 and often peak in tournaments.

West Indies have the ability to post huge totals, and both South Africa and New Zealand, neither of whom have ever won the World Cup, have enough quality to take the title after a number of near misses.

Indeed, of all the teams taking part, it is perhaps only difficult to make a strong case for Bangladesh, Sri Lanka or Afghanistan being the eventual champions.

“It will be exciting,” said former England captain Michael Vaughan. “There are so many star quality players across all the teams.

“The batsmen will try to smack the ball to all parts and the only way that bowlers can respond is by being aggressive.”