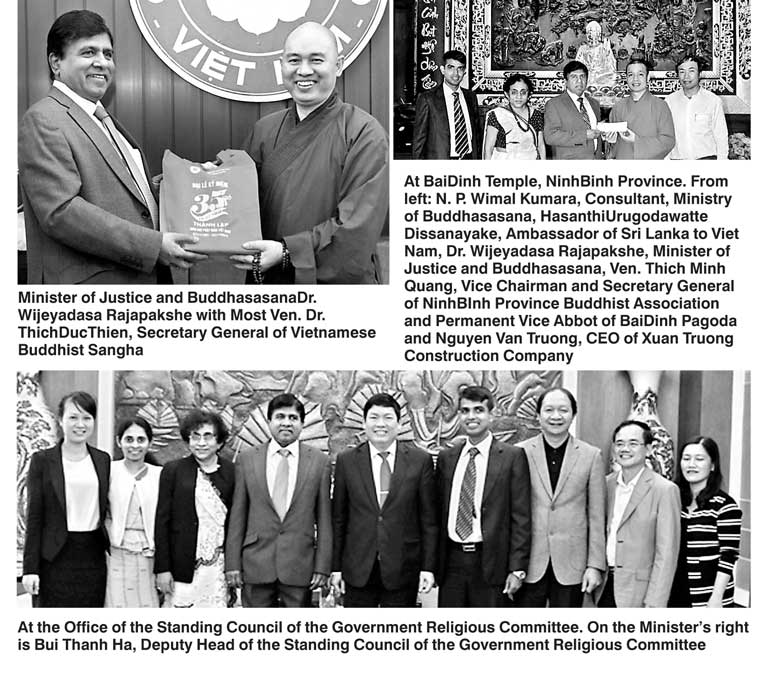 Dr. Wijeyadasa Rajapakshe, Minister of Justice and Buddhasasana, visited Ha Noi to deliver the Letter of Invitation from President Sirisena to Prime Minister Nguyen Xuan Phuc for the celebrations for the commemoration of the 14th UN Vesak Day in May 2017, to be held in Sri Lanka.

The Minister met Bui Thanh Ha, Deputy Head of the Standing Council of the Government Religious Committee of Viet Nam to handover the Official Invitation. This Committee directly reports to the Prime Minister, although for administrative purposes it is within the ministry of Public Security.

During the meeting, Minister Rajapakshe highlighted the significance of Sri Lanka for Buddhists, such as the belief that only country that the Lord Buddha has visited outside then India, was Sri Lanka, the fact that for the first time it was in Matale Alu Viharaya that the Tripitaka which continued through the centuries as an oral tradition was for the first time transcribed in ola leaf books in the 1st century B.C., presence of many tooth relics in famous stupas and at the Temple of the tooth Relic in Kandy, presence of the Sri Maha Bodhi Tree, etc.

He further explained role played by Sri Lanka in the 19th and 20th centuries to revive Buddhism, contribution to develop Lumbini, Bodhgaya, Kusinara, Saranath and other Buddhist sites in the Indian Sub-continent, founding of the international organisation – World Fellowship of Buddhists (WFB), initiated by Dr. Gunapala Malalasekera, in 1950, introduction of the 06-clolour Buddhist Flag to the world’s Buddhist community, etc.

The Minister also highlighted noted that the Sri Lanka Buddhist history and mentioned of the significance of place such as Anuradhapura, Kandy, Matale, Sripada, Mahiyangaya, Kelaniya, etc. with regard to Buddhism and Buddhist heritages.

He added that it was late Lakshman Kadirgamar, Foreign Minister of Sri Lanka, who proposed to UN Secretary General for recognition of the Vesak Day as an international day celebrated by the UN. Accordingly, The General Assembly, by its resolution 54/115 of 1999, recognised internationally the Day of Vesak to acknowledge the contribution that Buddhism, one of the oldest religions in the world, has made for over two and a half millennia and continues to make to the spirituality of humanity.

During the visit, the Minister visited the Quan Su Pagada in Ha Noi, the Headquarters of the Vietnamese Buddhist Sangha (VBS) on 17 March and was received by Most Venerable Dr. Thich Duc Thien, Secretary General of VBS and the Vice President of Viet Nam – Sri Lanka Friendship Association.

Ven.  Dr. Thien acknowledged Sri Lanka’s contribution to recognition of Buddhism in the world and reaffirmed that many Vietnamese Buddhists are aware of Sri Lanka’s Buddhist heritage and that it was his devotion to Sri Lanka that made him join the Viet Nam-Sri Lanka Friendship Association. He noted that Viet Nam hosted the celebrations of UN Vesak day in 2008 and 2014.

During the visit, Minister visited the temple of Literature, which was the first national University of Viet Nam, Ho Chi Minh Mausoleum which is the final resting place of the late president Ho chi Minh and   Bai Dinh Temple which is the place where Un Vesak Day was held in 2014.

Further, Minister Rajapakshe visited the Bai Dinh Temple in Ninh Binh Province, the venue for the 2014 UN Vesak Day celebrations in Viet Nam. At the temple, the Vietnamese businessman and philanthropist Nguyen Van Truong, CEO of Xuan Truong Construction Company donated $ 15,000 towards construction of the Buddhist thematic park under the guidance of the Ministry of Buddhasasana in Piliyandala.

Minister Rajapakshe is continuing his visit to Thailand, Laos, Myanmar and Cambodia to deliver the invitations personally to respective Heads of Government/State.