Chennai: V.K. Sasikala, the longtime companion of J. Jayalalithaa who became the party chief after her death, has been elected the chief of AIADMK’s legislature party, clearing the decks for her takeover as the Chief Minister of Tamil Nadu.

O. Panneerselvam, the current incumbent of the post who proposed her name at the party’s internal meeting this afternoon, announced his resignation soon after. Sources said Sasikala may take her oath tonight or tomorrow, depending on the availability of Governor C. Vidyasagar Rao, who is in Maharashtra.

Sasikala’s elevation ends a period of intense speculation and fulfills the vociferous demands of a section of the party which contends that it is unwise for the party and Government to have different power centres in the State.

After the announcement, Sasikala appeared in front of supporters on the balcony where the former Chief Minister was often seen, 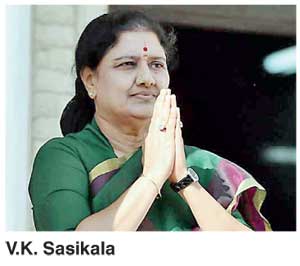 hands folded, in a dark green sari, a colour greatly favoured by Jayalalithaa. Tamil Nadu’s Iron Lady had even worn the colour after the sweeping victory of the AIADMK at the last assembly elections.

In her lifetime, Jayalalithaa occupied both posts and after taking charge of the party, Sasikala had promised to follow in her footsteps. It was expected that she would take over as Chief Minister by the end of January, but the massive protests over Jallikattu delayed it, sources had said.

Party leaders have said the pending disproportionate assets case against Sasikala will be no impediment to her takeover as the Chief Minister. Although she has been acquitted in the case along with Jayalalithaa, the verdict on an appeal is pending before the Supreme Court.

The Opposition DMK has protested, asking how Sasikala, who has no political or administrative experience, can be picked to lead the Government. “She has no experience. Was not even elected, don’t know what her policies are. How can she be CM?” asked a senior leader of the party.

Sasikala, 61, is not an elected member of the assembly and has never held any post in the party. Chinamma (mother’s younger sister) as she is fondly called by supporters, had taken charge of the party after a lot of coaxing from partymen. After her acceptance, there have been calls for the 65-year-old Panneerselvam, a Jayalalithaa loyalist who took over the top job after her death, to step down.

Sasikala’s takeover has been preceded by a series of changes both in the Government and the party. On Friday, a team of bureaucrats appointed by Jayalalithaa had been shifted. On Friday, Sasikala also added 23 people to the existing 38 office bearers at the headquarters. (Source: www.ndtv.com/)