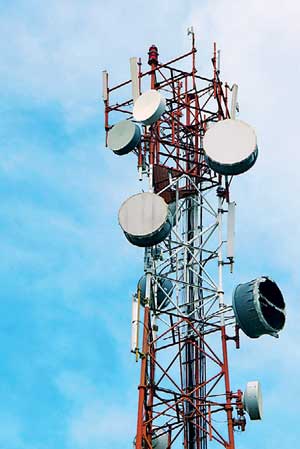 The implementation of the budget proposal to slap every cellular tower in the country with a levy of Rs.200,000 per month—payable by mobile operators—could result in the possible exit of the major foreign investors from the local telecommunication market, the industry warns.

Sri Lanka’s mobile telecommunication industry in a joint statement noted that over the past two decades the telecom sector has been the major contributor in terms of realized foreign direct investment (FDI) to the country.

“Implementation of the proposed levy on towers would result in great losses to three major international investors, resulting in their possible exit from the market,” the statement said.

According to the information available in the public domain, Malaysia’s Axiata, the controlling shareholder of Sri Lanka’s largest mobile telephony services provider, Dialog Axiata PLC, with in excess of a 12.4 million subscriber base, is the single largest foreign direct investor in the country. By last year, Axiata had invested over US $ 1.9 billion in the Lankan telecom industry.

The other two major investors in Sri Lanka’s mobile telephony landscape are believed to be the UAE-based telecommunications operator Etisalat—the parent of Etisalat Lanka and Hong Kong-based CK Hutchison Holdings, the owners of Hutch.

Although it has the smallest subscriber base, Hutchison Telecommunications Lanka (Pvt.) Ltd has one of the largest 3G tower networks in the country.

India’s Bharati Airtel, the latest entrant to the local mobile landscape with five service providers, is said to be largely sharing the existing infrastructure in carrying out its operations.

However, three out of the five mobile operators are still loss making and this loss-making situation of smaller operators was further deepened by their attempts to extend mobile services to the underpopulated areas of the country.

Nearly 6,750 towers are used by the five mobile operators to support the needs of a population of 20 million. However, each tower can only support the equipment of two to three operators, due to the tower loading constraints.

Such technologies will necessitate even more towers to cover the population, compared to GSM voice on 900MHz.

At present, each of the five mobile operators offers services on 900, 1800 and 2100MHz frequencies.

Thus, a radio transmitter for each of these frequencies by each operator has to be installed on these towers. This would have implications on a tower’s loading capabilities, thereby constraining the ability to share a tower.

Yet, all mobile operators under the direction of the Telecommunications Regulatory Commission of Sri Lanka (TRCSL) are already obliged to share towers before any approval is given for a new tower in a designated area. As such, very few new towers have been built over the last few years.

According to the budget presented by Finance Minister Mangala Samaraweera on November 9, proliferation of cellular towers is both an environmental and a health hazard and the levy was introduced to discourage proliferation of such towers.

However, the operators said the industry complies with all local and international environmental and health standards such as the World Health Organisation (WHO), Central Environment Authority (CEA) and GSMA standards.

“In addition, the telecom operators have installed advanced lightning protection systems in all their towers to protect expensive telecom equipment on site and the locality against lightning damage,” they said.

In addition, the operators noted that the towers are extremely costly and they would naturally be extremely conscious in building unnecessary towers.

As they pointed out, a tower costs more than Rs.10 million to build and Rs.115,000 a month to maintain, which includes electricity, security, site rent, etc. They said the proposed tower levy will increase the month operational cost of a tower by 174 percent to Rs.315,000.

“It is also vital to note that each frequency per tower can only support a few thousand mobile subscribers’ usage. Therefore, simple mathematics determines how many towers will be required to support the entire population,” they said.

It further noted that the operators already have a large number of loss-making towers in the rural areas of the country and these losses will be significantly augmented if the proposed levy were to be implemented, making them economically unviable to sustain.

“As a result, the mobile operators will be compelled to decommission a large number of unprofitable towers and reluctantly deprive the customers of service, particularly in the rural underdeveloped areas.”

Meanwhile, the operators noted that the proposed levy could slowdown the penetration of the Internet, which is an essential service in the current context. Internet penetration in Sri Lanka currently stands at only 38 percent.

“The fastest and most cost-effective way to increase national Internet penetration is wirelessly through mobile towers. The proposed cellular tower levy would only decelerate the growth of Internet penetration in Sri Lanka by curtailing further investment in 4G and future 5G technologies, thereby depriving a large number of the population’s access to Internet services,” they said.

For more than two decades Sri Lanka’s mobile industry had been a key contributor to the economy of Sri Lanka delivering 100 percent population penetration of mobile services at some of the lowest tariffs in the world. Sector analysts however opine that the proposed levy could press the sector indirectly towards the much-needed industry consolidation.