You are here: Home / Business Now / Time to get down to business: CB Chief

As the country returns to normalcy, Central Bank Governor Dr. Indrajit Coomaraswamy was largely optimistic of growth prospects and called for the business community to make the most of the latest changes in policy rates to promote business activity. Yet he acknowledged the monetary authority would revise growth numbers for 2019 after first quarter numbers were released in mid-June. 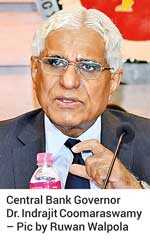 The Central Bank on Friday reduced policy rates by 50 basis points in response to slower global growth, a sluggish local economy and pressures created by the Easter Sunday attacks. However, the Governor was insistent that reserves and Sri Lanka’s debt repayment capacity remained undiminished by the attacks.

Speaking to reporters, Dr. Coomaraswamy emphasised that the Central Bank had the capacity to raise as much as $ 4 billion to bolster reserves and meet any political uncertainty that may be generated by elections. He also pointed out that there was some leeway as Sri Lanka’s next large debt repayment was only due in October 2020 and as much as 65% of debt due in 2019 has already been paid.

Cabinet last week gave approval for the Central Bank to raise $ 1.5 billion, which could be increased up to $ 2.5 billion, Dr. Coomaraswamy said.

In addition, the Treasury has finalised the debt figure for 2018, allowing Cabinet to approve raising up to 10% of that figure under the Liability Management Act that was approved by Parliament last October. Under the Act, the Central Bank expected to raise Rs. 480 billion, which is about $ 2 billion. This is 4% of the outstanding debt as at end 2018.

“There is now approval to raise money, and the Central Bank and Treasury are looking at all options. It could be a dollar-denominated sovereign bond, it could be a Samurai bond, it could be a Panda bond or it could be a term loan. For a term loan, there is the possibility the World Bank is also giving credit for reforms that we have already done or are about to finish, and there is also a possibility it will take on exposure for $ 250 million, which can be leveraged four times over. That means the Government can go out and borrow up to about $ 1 billion on the back of the World Bank’s AAA rating, which is a big benefit as that money can be borrowed at a lower rate, bringing significant savings,” he said.

“The plan is to raise as much money as possible not only to cover the payments of this year, but also to cover some payments for next year because it is possible that the election cycle will go on until about the middle of next year. At the moment, the market conditions seem good.”

Dr. Coomaraswamy noted that the decision to reduce rates was predicated on the slowdown in the US economy, which had led to a drop in yields and the possibility of fewer interest rate hikes from the US Federal Reserve. He pointed out the slowdown in the world economy will also have an impact on Sri Lanka’s growth prospects, which, together with the Easter Sunday attacks, worsened the country’s existing output gap. According to Central Bank calculations, the Sri Lankan economy has the capacity to grow at 5% but has been struggling to bridge the gap with 2018 growth slowing to just 3.2%.

“In April, we had projected growth to be 4% this year but after the events of the recent weeks, that figure is likely to be revised downwards. This means the output gap is larger now than it was in April. This is another reason for relaxing policy. We have also seen private sector credit growth slowdown. In the first quarter, it was down to 9.9% and broad money growth had reduced to 9%.”

However, core inflation has increased and is slightly above the 4-6% range, but in the inflation targeting framework that the Central Bank is following, it is headline inflation that is being focused on, and some of the reasons for core inflation increasing are likely to be transitory. However, Dr. Coomaraswamy acknowledged core inflation would be off target in the short-term.

“There are some salary increases that are targeted to come online in July and that will clearly feed into aggregate demand. The cautionary factor is development in the Government’s budgetary functions. Clearly there will be pressure to increase expenditure to compensate sectors affected by the Easter attacks. At the same time, on the revenue front, VAT, corporate and income taxes and Customs duties are likely to be affected. The Government is reviewing its whole Budget and plans to reprioritise and accommodate increases in expenditure and reductions in revenue as much as possible within the broad framework that it set out in the Appropriation Act. On balance, the case for relaxing was stronger last week than in early April, which is why the Monetary Board took the decision to reduce policy rates by 50 basis points,” the Governor said.

The two earlier liquidity injections and moves to have a rate cap on deposits to push down interest rates should result in a reduction of 200 basis points. As of last Thursday (30 May), the prime lending rate had reduced by 30 basis points but was seen as insufficient by the Governor. However, he acknowledged the time gap indicated more time will be needed for rates to drop as the expenses for the bank will only come down with new deposits. If interest rates do not reduce ‘significantly,’ the Governor warned the Central Bank would impose a lending interest rate cap as well.

“Everybody has to play their part and I’m sure the banks will do so, if not the Monetary Board will enforce a lending cap.”

On reserves and debt servicing, the Governor said reserves at the end of the year was projected to be $ 8.2 billion before the terror attacks. Giving his personal worst case scenario numbers, Dr. Coomaraswamy opined losses from tourism would be about $ 900 million in absolute terms given the large import component in the industry. Tourism was expected to earn $ 5 billion in 2019 but could still attract about $ 3.7 billion this year, he speculated.

Responding to questions on the functions of the Financial Intelligence Unit (FIU) operations under the Central Bank, the Governor pointed out the unit operated as a completely independent entity even though it was administratively linked to the Central Bank.

“The banks report, then FIU does the analysis, and on the basis of any suspicions they have, they then transfer that to the CID. The CID does the investigation to see whether there is any criminality. Clearly we have to tighten things up. There were 10 years of peace and none of us had any suspicion that any of these things would happen, so we have to learn lessons like anybody else to see what more needs to be done, what needs to be done better. I’m sure the FIU in collaboration with law enforcement will do that. For instance, we are now setting up stronger coordination between the CID, the Attorney General’s Department and the FIU so these cases can be moved on faster and there is better sharing of information.”

The Governor said the FIU had already met with the Attorney General’s Department and Inspector General of Police (IGP) to set up measures for better coordination.

Banks asked to exercise due diligence with respect to NGOs, charities

All licenced banks have been told to exercise due diligence with respect to non-governmental organisations (NGO)s, not-for-profit organisations or charities by the Central Bank’s (CBSL) Financial Intelligence Unit (FIU), and to monitor and report among others on organisations that receive direct foreign funds/remittances into their accounts.

The directive from the CBSL FIU sent to all CEOs/General Managers of all licenced banks stated that under Rule 51 of the Financial Institutions (Customer Due Diligence) Rules, No. 1 of 2016, “every Financial Institution shall conduct enhanced COD measures when entering into a relationship with a NGO or a Not-for Profit Organisation and Charity to ensure that their accounts are used for legitimate purposes and the transactions are commensurate with the declared objectives and purposes.”