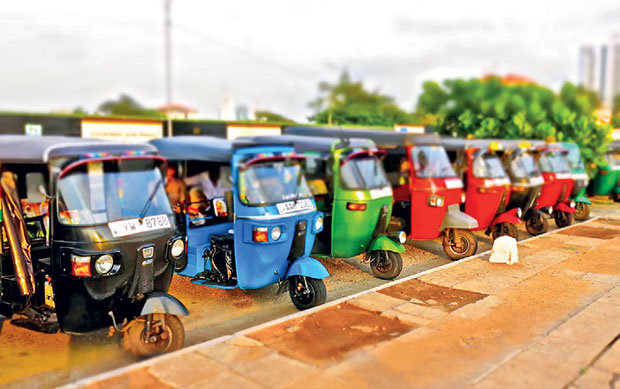 The registration of three-wheelers has nosedived to a quarter of the previous levels since the new loan-to-value (LTV) ratios for automobile financing came into effect this month, according to an industry expert.
“The rule has been in effect for only 10 days but the volumes are coming down to one-fourth. I can’t tell you exactly because the leases were given based on the old rules for the first half of the month, so we will have to wait till the next month to see the accurate figures,” Finance Houses Association of Sri Lanka Chairman Ravi Yatawara said.
The government last week introduced a 25 percent LTV ratio for three-wheelers, a 50 percent LTV ratio for motorcars and vans and a 90 percent LTV ratio for commercial vehicles.
The government excluded the vehicles imported for tourism purposes from being subjected to the new rules.
For the first 11 months of 2016, an average of 4,585 three-wheelers was registered each month, after a 70 percent LTV ratio was introduced in December 2015.
“Around 4,000 to 5,000 three-wheelers were registered every month and I think this will come down to 1,000,” Yatawara said.

In 2015, the average three-wheeler registration for a month was 10,743.
The government brought in the heavy LTV ratio and other regulatory measures on three-wheelers last week after evaluating the research submitted by the local academia. Currently, Sri Lanka has over one million three-wheelers, which is thrice the demand requirement for the country, according to research. However, the prices have not fallen in line with the supply glut, with some three-wheeler drivers continuing to charge ad hoc prices.
A wide section of society in Colombo blame three-wheelers and buses for creating unsafe and congested roads and bus and three-wheeler trade associations had strongly opposed the government’s recent attempts to increase traffic fines.Despite the existence of the LTV ratio, some finance companies have resorted to creative methods to provide greater financing for customers, which the Central Bank officials said that the regulator is not in a capacity to monitor.