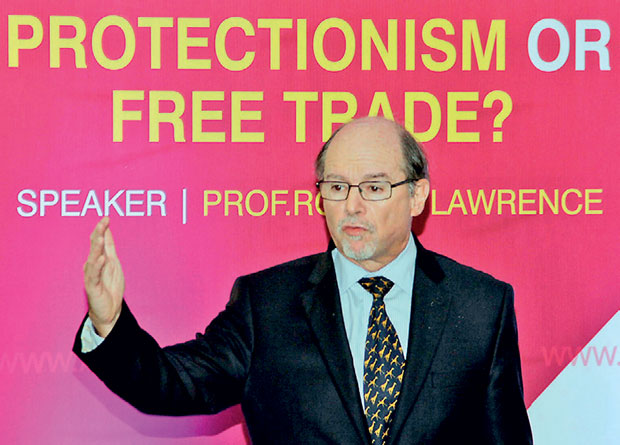 “When we put tariffs on imports, what we are doing is taxing our exports.

Tariff is the wrong way to raise revenue. The right way to raise revenue is to broadly base taxes—income taxes, property taxes etc. Tariffs are not primarily a revenue-raising device,” Prof. Lawrence told an audience, which comprised of policy makers, economists, trade officials and private sector representatives.

Sri Lanka has been the first in South Asia to embrace an open economy in 1978 and open doors for free trade, moving away from the protectionist, import-substitution policies that had damaged the economy and the quality of life of the people for many years.

Until year 2000, Sri Lanka was able to maintain its open trade policies, albeit with temporary hiccups, and tariffs continued to fall.

But the heightening of the separatist war with the LTTE in 2001 made protectionist tendencies creep into the trade policy framework, and import tariffs were increased with the policy makers seeing tariffs as a major way to raise funds for the government to fight the war and manage public finances.

Although some relaxation in protectionist policies was seen in 2010, after the end of the war in 2009, according to World Bank Sri Lanka is still among the most protected economies in the world.

To elaborate on his point, Prof. Lawrence brought in a number of examples in the developed and developing worlds, where significantly lower tariffs have boosted exports as well as imports and propelled economic growth.

Talking specifically about Sri Lanka, he showed how exports have declined since 2000, outweighing the possible gains from decline in imports. In fact Sri Lanka’s exports as a percentage of GDP have been in a freefall, from 33.3 percent in 2000 to 12.7 percent in 2016.

“Sri Lanka was able to grow its exports until about 2000 quite merrily. But since 2000 exports have dropped by 20 percent.

You invented a kind of tariffs; I haven’t even heard this word before—para-tariffs—it’s something unique I think to Sri Lanka; the only part of your language I ever speak,” Prof. Lawrence quipped.
He also pointed out that most of the tariffs Sri Lanka has been charging have no economic rationale and they are not linked to economic cycles but political influence.

“You should not only look at your nominal tariff rates, but you should also look at your tariffs structure and the most dangerous thing you have been doing as an exporter is to put tariffs on your imports,” he added.

Continuing the trend of previous years, in 2016 too Sri Lanka Customs collected the highest tax revenue, which accounted for 57 percent of total tax revenue while the country’s main tax agency Inland Revenue Department contributed only 32 percent.