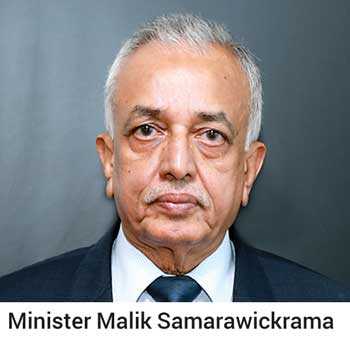 Development Strategies and International Trade Minister Malik Samarawickrama yesterday welcomed the Parliament decision to repeal the controversial Takeover Act that was implemented during the former Government as a step that would boost investor confidence.

The Revival of Underperforming Enterprises or Underutilised Assets Act No. 43 of 2011 was repealed by Parliament on Thursday in Parliament with a majority of 22 votes. The division was taken at the Second Reading, which received 91 votes in favour and 69 against, enabling the House to pass the Bill with amendments.

“This latest move is yet another step that our Government has taken to rebuild investor confidence and roll back bad decisions taken in the past. Our Government recognises that as a country aiming to be an attractive destination for investment, protecting property rights of investors is of paramount importance,” the Minister said releasing a statement.

According to the Bill, 37 assets were acquired by the State under the Revival of Underperforming Enterprises or Underutilised Assets Act, No. 43 of 2011. Out of the assets relevant to the Act, 22 assets have been vested with the Board of Investment (BOI) and six assets were vested with the Urban Development Authority (UDA) according to the Cabinet decisions taken from time to time.

“The draconian and invasive ‘expropriation law’ that was introduced hurriedly and surreptitiously by the previous Government, severely damaged confidence among private investors, and hurt the country’s standing as a business-friendly nation. The Government arbitrarily took over 37 assets owned by private entrepreneurs in a high-handed manner, and this should never have happened.”

“After the expropriation, the enterprises were placed under the management of various Government bodies with hardly any competence to run them. As a result, although the name of the Act referred to ‘revival’, instead many of these assets have significantly lost their value. The repealing of this Act is a demonstration of our Governments commitment to encouraging the private sector and gives confidence to domestic and international investors,” he added.