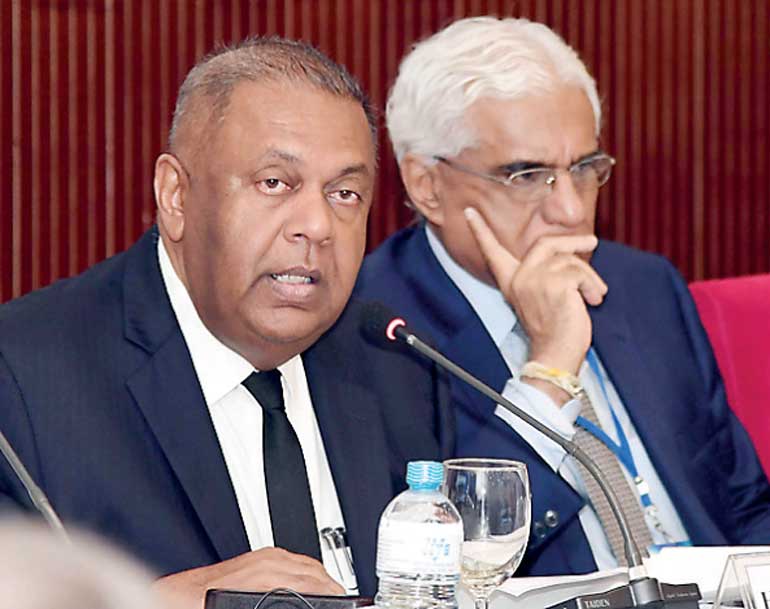 The Finance Minister, addressing the G-24 Technical Group Meeting in Colombo, drew attention to the forecasts of stronger growth in developed nations which is expectedto push up global interest rates. This would mean that emerging markets with mid-to-high levels of debt would find it more expensive to raise funds to repay debt in international financial markets.

The IMF Spring Meetings will be held in Washington next month where the G-24 Technical Group is tasked with presenting measures that could be taken to promote sustainable debt repayment by developing countries.

Sri Lanka has particular interest in the matter as from 2019 it has to repay about $3.5 billion each year until 2022. The Minister recalled that the IMF’s latest World Economic Outlookreport issued last month stated: “The tightening of global financial conditions would have implications for global asset prices and capital flows, leaving economies with high gross debt refinancing needs and un-hedged dollar liabilities particularly exposed to financial distress.”

“These structural factors are not conducive to effective debt management and entail repayments risks even at modest levels of absolute debt. Whilst this does not mean that all such countries may face repayment problems due to structural or policy weaknesses, we can infer an important message. The current global financial context demands our urgent attention to further strengthen our macroeconomic policies and institutions, particularly in the sphere of public debt management,” the Finance Minister said.

The Minister called on G24 members to strongly represent the interests of developing countries at multilateral forums, including International Monetary Fund (IMF) deliberations, as they would face strong challenges to repaying debt within relatively short time periods.

“The IMF forecasts that the gross financing needs for 2018 in emerging and middle-income economies ranges from 4% to 43%of the GDP with an average of 10.4%. In many developing economies, a high proportion of this outstanding debt is held by non-residents. This creates added complexities in the policy response,” the Minister noted.

Sri Lanka’s debt is estimated to be about 78% of GDP, higher than other countries with similar economic growth numbers.

“It is clear that Sri Lanka, like many developing nations, faces such refinancing risks in the coming years. This warrants a concerted and coordinated policy response to mitigate such risks,” Samaraweera told the gathering.

Due to the verity of impending developments in global financial markets, the World Bank and IMF jointly formulated a new framework on Debt Sustainability for Low-Income Countries, as announced in October last year. This new framework, which will be implemented in the second half of 2018, will help guide countries and donors in mobilising financing for development needs. The new framework will help mitigate the risk of an excessive build-up of debt in the period ahead.

“Even countries with relatively low levels of absolute debt may face repayment challenges if there are weaknesses in economic structures and debt management institutions,” Samaraweera warned.

According to the IMF’s Fiscal Monitor, within the group of low-income developing economies, over 90% of the countries had debt levels over 30% of GDP as at end-2016.

However, the average government revenue within the same group of countries is 15% of GDP, the primary deficit is around 3% of GDP on average and exports are dominated by primary products.