Sinhala Hindu New Year Festival was celebrated at the premises of Sri Lanka Embassy in Beijing on 16 April with over 275 participants including Sri Lankans, Chinese and other countries. The celebration was co-organised by the Embassy and China-Sri Lanka Youth Forum. 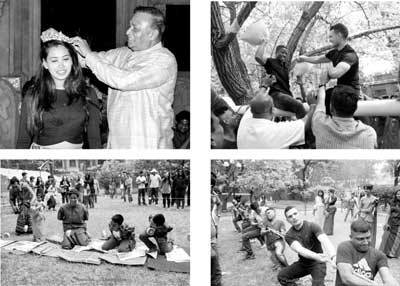 The festival was filled with traditional customs and rituals which was an immense opportunity for Sri Lankans in Beijing and adjacent areas to get together and showcase the value of the Sri Lankan customs to all foreign visitors.

All the foreign visitors to the event were warmly welcomed according to the Sinhalese rituals and they were entertained with cultural performances by Beijing and Tianjin Students Cultural troupes and were treated to traditional Sri Lankan food.

The event also offered the experience of more than 30 ‘Avurudu’ games to the participants who enjoyed marathon, pillow fighting, tug of war, and bursting of balloons.

At the end of the ceremony the selection of ‘Avurudu Kumara’ and ‘Avurudu Kumari’ among the other events, was the most eye-catching event.