You are here: Home / Business Now / Sri Lankan Naval Commander on a bilateral visit to Pakistan 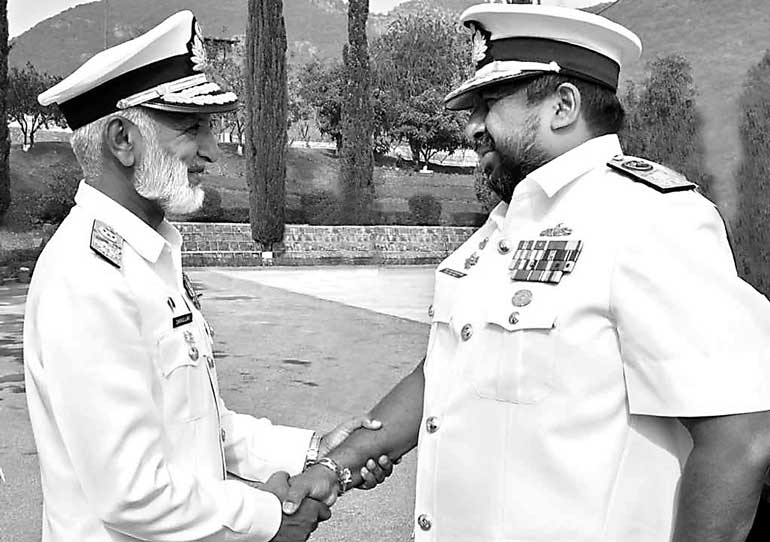 Navy Commander Vice Admiral R. C. Wijegunaratne, who is on an official visit to Pakistan, paid a visit to the naval headquarters in Islamabad where he called on Chief of Naval Staff Admiral Muhammad Zakaullah. The Navy Commander is in Pakistan on the invitation of Zakaullah.

Detailed discussions were held between the two on bilateral naval collaboration in diverse fields, and Wijegunaratne was also briefed on the Pakistani Navy’s operational developments. Zakaullah thanked Wijegunaratne for the Sri Lankan Navy’s active participation in the multinational naval exercise AMAN 17 under the theme ‘Together for Peace.’ The Sri Lankan Navy Chief, in turn, lauded the efforts of the Pakistan Navy to maintain collaborative security in the Indian Ocean and beyond. Wijegunaratne also called on the Pakistani Federal Minister for Defence Production, the Chairman of the Joint Chiefs of Staff Committee, the Chief of Army Staff and Chief of Air Staff on his visit to Islamabad.

Earlier during his visit to Karachi, Wijegunaratne attended different AMAN 17 events, including the International Fleet Review and the second session of the International Maritime Conference. He was the chief guest at the International Band Display and Maritime Counter Terrorism Demo, also held in Karachi. The Commander also visited the Naval Field Commands in Karachi and laid a wreath at the mausoleum of Quad-e-Azam. He later called on the Pakistan Navy War College Lahore.

Vice Admiral Wijegunaratne is an alumni of Pakistan Navy Staff College, a graduate of Karachi University of Pakistan and National Defence University Washington DC, USA. The visit is expected to greatly enhance the bilateral collaboration between the two navies in various avenues.