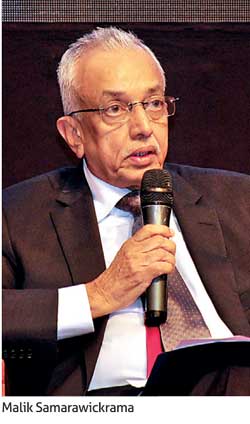 Sri Lanka is hoping to have the final discussions on the Free Trade Agreement (FTA) with Singapore today and tomorrow, and the agreement will be ready by January, according to International Trade and Development Strategies Minister Malik Samarawickrama.

“We hope to have the final overall discussion with Singapore on Monday and Tuesday, and hopefully, the agreement will be in place in January,” Samarawickrama said at the E&Y post-budget forum, just hours before departing for Singapore.

Curiously, the ‘International Enterprise Singapore’ web portal of the Singaporean government, which lists the countries with which Singapore has FTAs in operation, signed and yet to be implemented, and under negotiation, does not list Sri Lanka.In 2016, Sri Lanka exported US$ 114 million, or 1.1 percent of the country’s total exports, to Singapore, while US$ 1.18 billion in imports came from Singapore, worth 6.1 percent of Sri Lanka’s total imports, and the third largest import source for the country. Some of the top Sri Lankan exports to Singapore include petroleum oils (other than crude), tea, rubber tyres, previous/semi-precious stone, flour, and fish, while Sri Lanka imports mainly petroleum products, machinery, electronic equipment, chemicals, plastic, and food stuff from Singapore, according to the Institute of Policy Studies.

The Singapore FTA is aimed to be the first trade pact signed by Sri Lanka, ahead of a host of others.
“As far as the agreements with India and China are concerned, we are hopeful that they will be completed by the mid to second half of next year, which will be followed by trade agreements with Bangladesh and Thailand,” Samarawickrama said. Historically, Sri Lanka hasn’t been able to meet the targets it has set to negotiate and sign FTAs.

The China FTA has been continuously delayed, while the Economic and Technology Cooperation Agreement (ETCA) with India is now the second iteration of a deeper economic pact with the neighbour, after the initial Comprehensive Economic Partnership Agreement for which negotiations began in 2005 were scrapped after the agreement was finalized in 2008, by the previous regime.
In July 2016, Samarawickrama himself had said that the Singapore FTA and ETCA would be finalized by the end of 2016, while the China FTA would be finalized before March 2017.

At a recent seminar, Lakshman Kadiragamar Institute (LKI) Global Economy Programme Chair Dr. Ganeshan Wignaraja advised the government to first sign the politically-motivated FTA with China, which would quickly result in an agreement with India being signed as well.

Speaking at the same seminar, National University of Singapore Visiting Senior Research Fellow, James Crabtree questioned whether trade agreements (and especially regional trade agreements) were having the same impact now, as they had in the past.

Meanwhile, Samarawickrama said that the government was working to further liberalize and modernize the country’s international trade agenda with the complete removal of paratariffs—except for revenue sensitive items—in two to three years, development of competitiveness and quality of Sri Lankan exports, and improving the business climate to move potential local and foreign investors to action.

Paratariffs and entrenched bureaucratic red tape have been identified as two of the biggest hindrances for Sri Lanka’s international trade development.

While paratariffs are now being phased out—with 1,200 proposed to be removed under the 2018 budget—Deputy Treasury Secretary S. R. Attygalle said that the bureaucracy, which gained strength from the nature of the archaic legislation, will also be eased, after Finance and Mass Media Minister Mangala Samaraweera said that most laws, including the Customs Ordinance will be reformed.
However, trade economists have noted that Sri Lanka might face challenges when entering into the Chinese and Indian markets under the new agreements, due to issues such as paratariffs, bureaucracy, federal laws, different quality standard measurements etc. in these markets.