You are here: Home / Business Now / Sri Lanka is a big bet for us, says Tundra Fonder – Daily Mirror


By Chandeepa Wettasinghe
While calling its investments in Lankan stocks a “big bet”, a top Swedish asset management firm said greater liquidity in the Colombo Stock Exchange (CSE) is paramount for Sri Lanka to attract more foreign investor interest to the stock market. 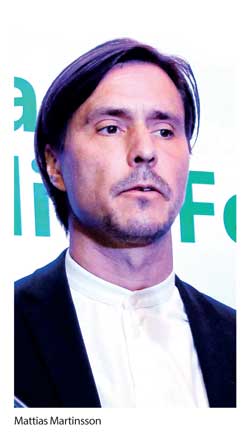 “If liquidity improves in line with the Colombo Stock Exchange’s strategy to invite more foreign strategic investors and if there’s cross exchange trading, then you would have much more foreign investors here,” said Tundra Fonder AB Founder/CIO Mattias Martinsson.

Tundra Fonder has US $ 400 million in assets under management and US $ 150 million is in the Frontier Sustainability Fund, which has invested US $ 20 million or 12 percent of the fund portfolio, in Sri Lanka.

He added that Tundra Fonder’s investment in Sri Lanka too would only increase, if the market turnover increases.

One of the attempts of the CSE to increase the liquidity in the market was to introduce a minimum public float, which required the companies listed on the Main Board to have 20 percent of its ownership among non-related parties, while the companies in the secondary Diri Savi Board were required to have a 10 percent float.

However, the initiative was met with resistance, with over 60 companies of the 299 publicly listed companies not falling in line with the regulations.

A handful of companies delisted or announced their intentions to delist over the regulations, while many other companies on the Main Board downgraded themselves to the Diri Savi Board in order to allow the main shareholders to retain greater stakes in the companies.

The CSE has since expressed its reservations about forcing companies to adhere to the minimum public float regulations.

Meanwhile, Martinsson said that Sri Lanka’s political volatility and risk arising from sovereign debt are short-term hurdles, which would not deter institutional investors such as Tundra Fonder, which are looking at the long-term opportunities for their portfolio, since Sri Lanka has always provided an environment for large corporates to flourish.

Communication of environmental and social governance (ESG) practices of Sri Lankan firms would be key for companies to attract foreign investor interest, according to Tundra Fonder.

Tundra Fonder’s rating system allows companies in markets such as Sri Lanka to improve their ESG practices up to global benchmarks, which Tundra Fonder then shows to foreign investors, to entice investment into such companies in frontier and emerging markets.

“If we can’t show them that we have done a proper ESG research on the companies, then they will assume that something is wrong,” Martinsson said.

Sustainable assets generate double the returns compared to other assets, he said, further adding that in another five years’ time, the investors would only be interested in companies practicing ESG.

He added that communication of the corporate sector growth opportunities and breaking simplified stereotypes such as the continued association of Sri Lanka with a civil war are important for attracting foreign investor interest.

Tundra Fonder, which was founded six years ago, has invested in corporates displaying ESG in seven countries and the assets under the Tundra Fonder management have doubled each year, to reach US $ 400 million.