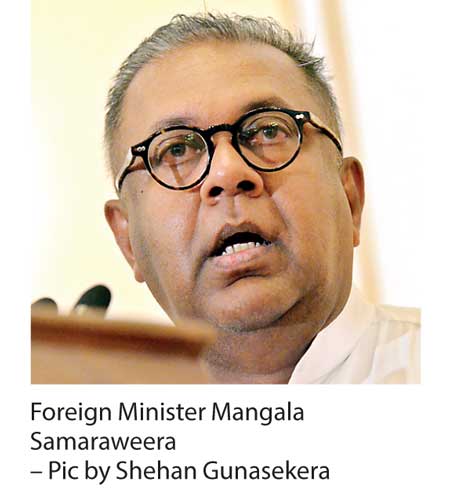 The Foreign Minister yesterday said Sri Lanka as a sovereign nation was free to decide on implementing the recommendations of the United Nations Human Rights Council (UNHRC), maintaining that the homegrown mechanism to address alleged human rights abuses would be preferred by the Government.

Disputing the claim that the council had directed the country to include foreign judges in the probe of war crimes allegations, Minister Mangala Samaraweera said the Government was in the process of building trust in the country’s Judiciary to ensure that the solutions given were acceptable to the aggrieved parties.

Speaking to the media at the Foreign Ministry, Samaraweera said that the Government was satisfied with the progress made on addressing the reconciliation efforts during the last two years although it may not be accepted by affected parties.

“For victims it is a long time, but I think we have made progress. The Office of Missing Persons Act is now part of the law of the land; it will be operative very soon. When compared to countries like South Africa and Argentina, which took about four to five years to establish a mechanism, we are making good progress,” he highlighted.

The much-debated institution will be under the supervision of the country’s Prime Minister, said Samaraweera, adding that the resolution to grant the country a two-year extension was a decision that all participant countries at the council agreed upon.

The Minister said that the Government’s greatest victory was to reverse the punitive action the international community was to impose on the nation and winning their support for a local mechanism to address the grievances of all affected parties.

“From the point of a forced investigation on Sri Lanka, without the consent of the Government, we have been able to turn it around where the UNHRC has agreed to accept a mechanism preferred by the Government, has accepted the decision of a sovereign nation,” he said.

Accusing former president Mahinda Rajapaksa of working towards a situation where the international community lost faith in domestic systems, Samaraweera directed a scathing attack at the recent comments of the former head of state, claiming that if not for the current Government, the international committee would have already slapped sanctions on Sri Lanka. Two staunch supporters of Rajapaksa were also severely criticised by the Minister for their recent comments on the Government’s performance in connection with reconciliation efforts.

However, he assured that the Government would carry out a credible investigation into the allegations, where those who behaved against the law would be brought to justice.

“We maintain that our army is disciplined, but there may be isolated incidents. We have to ensure that not only the soldiers carrying out the crimes are punished but also those who ordered those things,” he said.

The Minister also denied allegations of the existence of a torture chamber called ’Joseph Camp’ by the International Truth and Justice Project’s Yasmin Sooka, reissuing an invitation to her to visit the island to carry out her own research into the matter.