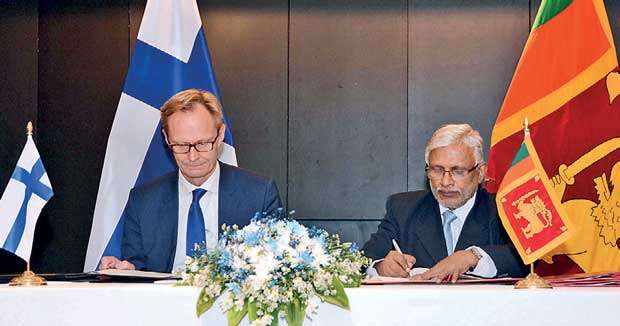 Enhancing economic corporation, the Government of Sri Lanka yesterday signed three memorandums of understanding (MoUs) with the Government of Finland, on digitalization, health and education sectors in addition to two private sector agreements on higher education and fertiliser.

Two more agreements will be signed within the next two weeks; they include a joint venture for a 100MW thermal electricity generation project in Bangladesh with Sri Lanka’s Lakdhanavi Limited – LTL Holdings.

Addressing the agreement signing ceremony, Finland Economic Affairs and Employment Deputy Minister Petri Peltonen said, “Sri Lanka has recognized ICT as a key catalyst and a strategic source of transformation towards smart cities and a smart society. We believe that through the MoUs we are signing today, we can share valuable knowledge and expertise as well as encourage private and public actors to identify possible joint projects, pilots and activities for the benefit of both Sri Lanka and Finland.” 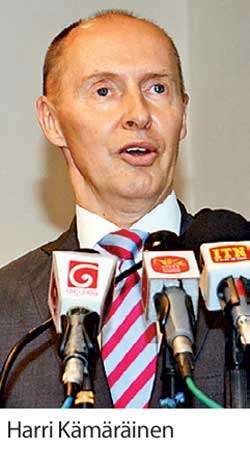 The Finnish government officials stated that the MoUs would help the two countries to focus on areas of cooperation encouraging investment and technology partnerships such as accelerating commercial and industrial exchanges, encouraging business partnerships and joint ventures between enterprises, facilitating technology development efforts as well as promoting educational and learning exchanges.

Bangladeshi Power Development Board had awarded the project to LTL following competitive bidding.

A private sector agreement was also signed between Sri Lanka’s Bio Fertilizer (Pvt.) Limited and Ductor Corporation in Finland, concerning a joint venture for production of bio-gas and organic fertilizers.

Another agreement of intent was signed between Imperial Institute of Higher Education in Sri Lanka and EduExcellence in Finland, on training, education and pedagogy capacity building and bioscience.

An MoU was also signed between the Republic of Finland Education and Culture Ministry and Sri Lanka Education Ministry, concerning the cooperation in the field of vocational education and training in secondary education.

The MoU on vocational education and training is aimed at extending the bilateral cooperation in the field of vocational education and training (VET) in secondary education. The officials of both governments stressed that the MoU is an important tool for sharing experience and expertise in the field of secondary education, including design and development of education system, promotion of new and innovative learning environments and implementation of evaluation and assessment systems.

Addressing the gathering, Senior Director of Digital Ecosystems from Business Finland—the Finnish innovation funding and trade-investment and travel promotion organisation—Hanna Marttinen-Deakins said, “The Finnish company cluster visiting Sri Lanka now provides solutions for public safety including applications as well as operational and planning expertise. These Finnish companies have a track record for long-term collaboration with authorities, ensuring customer orientation, attention to local needs and user friendliness and in their solutions and way of working.”

Peltonen was joined on his visit to Sri Lanka by a delegation of 17 top Finnish companies representing the sectors of disaster management, both preventive and operational and critical communications, which can ensure societal safety and security.