You are here: Home / Business Now / Sri Lanka a growing hub in Indo-Pacific 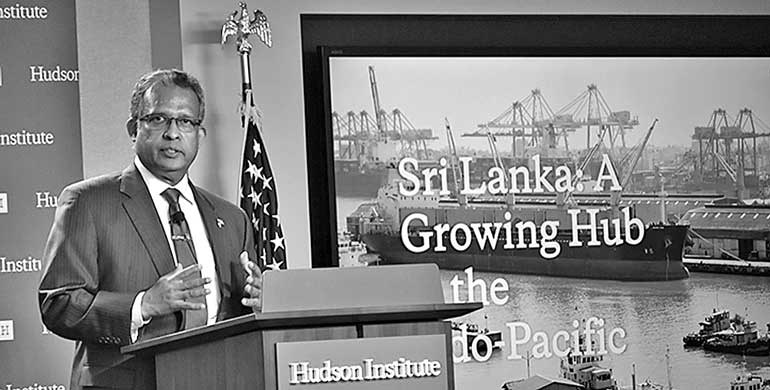 Sri Lanka’s Ambassador to the United States Prasad Kariyawasam has expressed the country’s willingness to work with maritime powers of the Indian Ocean and beyond.

“Sri Lanka is eager to work with the maritime powers of the Indian Ocean and beyond, to make our oceans secure for unimpeded commerce and peaceful navigation,” said Kariyawasam said, addressing a public event hosted by the Hudson Institute, a Washington-based think tank on ‘Sri Lanka, a growing hub in the Indo-Pacific’ on 8 March.

Ambassador Husain Haqqani, Senior Fellow & Director, South and Central Asia, Hudson Institute moderated the event. He introduced Sri Lanka as a fast emerging economic and political powerhouse, disproportionate to its size both in geographic terms and in population. He observed that Sri Lanka’s geo-strategic location has helped it emerge as a critical stakeholder in the Indo-Pacific region.

Echoing Ambassador Haqqani’s observation, Ambassador Kariyawasam said that Sri Lanka’s location made it a maritime hub since ancient times, and having achieved peace and stability, Sri Lanka was keen and able to reassume this important role in the Indian Ocean and the extended terrain of the Indo-Pacific. Sri Lanka is situated in the sea lanes connected with the other main growth engines in the Indo-Pacific.

This busy East-West shipping route passes just six nautical miles south of Sri Lanka, carrying two-thirds of global petroleum supplies and half of all containerised cargo. The Colombo Port is already the busiest transshipment port in South Asia.  In the current international environment where many locations are becoming insecure and volatile or face environmental challenges, Sri Lanka, in comparison, is a country at peace, has consolidated democracy, and revived economic growth, with emphasis on a green and a blue economy.