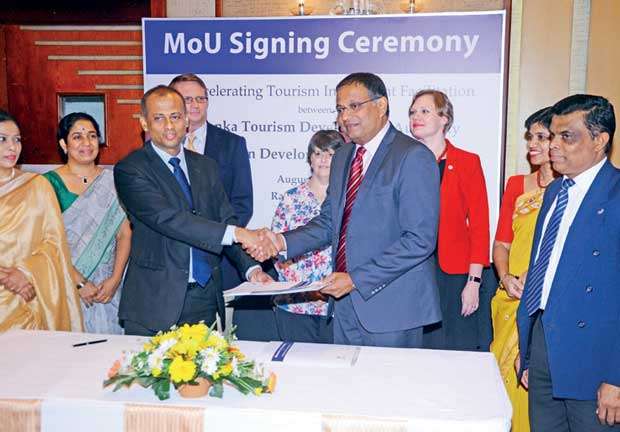 SLTDA Chairman Kavan Ratnayaka and UDA Chairman Dr. Jagath Munasinghe formalised the agreement on behalf of the two entities at Ramada hotel Colombo.
Despite the establishment of a one-stop shop at the SLTDA in 2010 to facilitate tourism projects, the investment approval time period remains excessively lengthy, where an investor would have to wait 244 days on average to receive the approval for a project.

In addition, the approval process of tourism projects includes 12 line agencies, such as the UDA, Central Environmental Authority (CEA), Coast Conservation and Coastal Resources Management Department (CC and CRMD), in addition to 31 other state agencies, local authorities and Divisional Secretariats.

The SLTDA data indicated that its one-stop shop was only able to successfully facilitate 326 tourism projects between September 2010 and June 2018, out of 604 processed projects, while 10 to 20 projects have been rejected.

“When you see the number of approvals with various agencies, some investors run away,” said SLTDA Director General P.U. Ratnayake.

He noted that the UDA was the first entity partner, which would be followed by the CEA, CC and CRMD and others.

Under the agreement with the SLTDA and UDA, the two agencies are expected to re-engineer the existing process of both agencies targeting investor convenience, enhanced efficiency and effectiveness under two phases: interim solutions with possible improvements and fully re-engineered automated process.

Dr. Munasinghe emphasised that the UDA is leading the way in terms of efficiency, granting the approval for physical developments and noted that the UDA has fully automated its processes as the UDA only accepts online applications from May onwards.

The initiative was facilitated by the USAID’s Supporting Accelerated Investment in Sri Lanka project, which has been closely working with the SLTDA and UDA to support development of the agreement and the streamlining of overall investment process, in an effort to improve efficiency and reduce the time and costs for investors to obtain the approval for their projects.

The SLTDA expects 5500 new rooms would come into the market this year, while around 3500 rooms have been added to the existing stock so far this year.