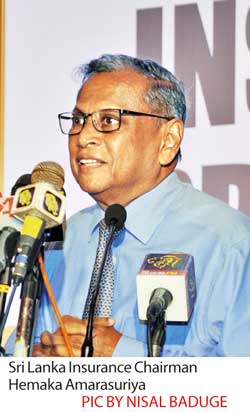 State-owned insurance giant Sri Lanka Insurance (SLI) has once again consolidated its position as the market leader in the general insurance sector in the island.
The company has emerged as the No.1 in general insurance with a healthy market share of 21.3 percent as at December 31, 2017.

The company commands a market share of 22.69 percent in the non-motor sector and a 20.5 percent share in motor, leading both sectors of the general Insurance market. SLI’s general insurance business reported a market growth of 20.5 percent during the above period over the corresponding period of 2016—a remarkable achievement considering the general insurance industry growth rate of 15.8 percent during the year under review.

The total gross written premium (GWP) of the general insurance market for the year was Rs.88.9 billion while the compound annual growth rate (CAGR) over the period from 2013 to 2017 was 7.89 percent. The company’s motor insurance segment reported a growth of 10.85 percent over 2016 with a CAGR of 9.53 percent. The GWP for the year 2017 was Rs. 11.56 billion. Meanwhile, the growth in non-motor segment of SLI was reported at 39.68 percent.

The sector achieved a GWP of Rs.7.3 billion for the year, which compares to an industry growth of 19.44 percent in this segment.

Accordingly, the total general category GWP reported for the year stood at of Rs.18.9 billion.

This is a commendable performance in a market where there is intense competition among 28 insurance companies of which 16 are involved in general insurance.
There are also 56 insurance brokers in the market. The number of insurance agents in the industry could be placed at 43,800.

However, according to insurance industry analysts, this is a market with enormous potential as the general insurance penetration as a percentage of GDP is at 0.67 percent.

SLI’s performance in the general insurance sector has been consistent throughout history. It has always come to the support of the communities that it works with and has honoured its claims.

In fact, the largest ever insurance claim in the island’s history, worth around Rs.36.9 billion had also been paid by SLI in 2001 to SriLankan Airlines.

During the year 2017, SLI honoured general insurance claims worth Rs.9.3 billion of which Rs.6.9 billion was related to motor and Rs.2.4 billion was in non-motor.
Rs.350 million was paid as claims in the aftermath of the 2017 floods. The company settled over Rs.600 million in claims during the floods of 2016.

Securing the insurance partnership of the Suraksha free medical and personal accident cover introduced by the Education Ministry for all Sri Lankan schoolchildren in October 2017 is another feather in the cap of SLI, which has already settled over 1,500 claims under this scheme.