You are here: Home / Business Now / SLFP says no family will be removed due to Hambantota industrial zone

Defending the Government’s move to lease the Hambantota Port to China Merchants Port Holdings Company (CMPort), the Sri Lanka Freedom Party (SLFP) yesterday refuted the claims of the Joint Opposition that it would confiscate the lands of people in Hambantota for a proposed industrial zone.

Addressing an SLFP weekly media briefing, United People’s Freedom Alliance (UPFA) General Secretary Minister Mahinda Amaraweera said that not a single family living in Hambantota would be removed due to the industrial zone.

“I can confirm as a Hambantota District Parliamentarian that 35,000 families in Hambantota will not be removed from their lands to create an industrial zone. We strongly deny all the false comments made by the Joint Opposition and some other parties that the Government’s intention is to evict people living in Hambantota,” he said. 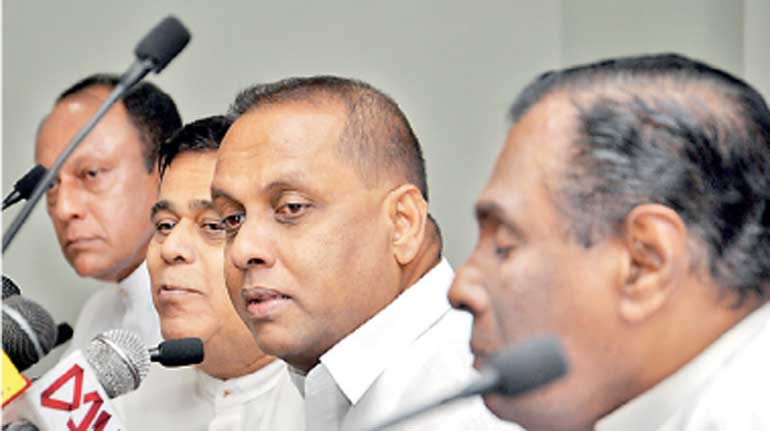 â€‹However, Amaraweera said 250 families would be relocated from the port area in order to facilitate the expansion of the port premises.

He said all of these families would receive proper compensation and a new house.

Commenting on the proposed industrial zone in Hambantota, Amaraweera said that 15,000 acres of bare land would be used for the establishment of the zone. He said the Government was still searching for bare land in those areas.

Amaraweera added that if the Government failed to find empty land, the zone could be moved to the Moneragala and Ambalangoda areas.

The Minister further said that 15,000 acres would be used to develop three main industries including cement, gas and electricity and an oil terminal.

“The Government is expected to open a cement manufacturing plant and a gas and electricity plant in the Hambantota industrial zone while the rest of the land will be used to build an oil terminal. It will definitely create a number of job opportunities for locals and the Chinese will only offer technical support,” he expressed.

Amaraweera said the Government had already appointed a special committee to figure out whether these industries were eco-friendly.

“The SLFP will not allow the Government to create any industry which is harmful to the environment,” he stated.  Amaraweera also stressed that there was no plan to sign a joint venture between China and Sri Lanka for the port project on 7 January as some were claiming. He said the Government only had signed a framework agreement to mark the initial step of the project.“There will only be an occasion to announce the project on 7 January in Hambantota, but no agreement will be signed on that day,” he asserted.

He said that the Government needed more time to study the venture before it was signed. However, Cabinet Spokesman Minister Rajitha Senaratne said on Wednesday that the joint venture between CMPort and the Sri Lanka Port Authority would be signed as scheduled on 7 January despite the objections of the Joint Opposition and the Janatha Vimukthi Peramuna (JVP).

He said that if the SLFP decided to leave the Unity Government it would hurt the country’s stability.

However, de Silva said that the final decision to stay or leave would be taken by the party’s Central Committee.

United People’s Freedom Alliance (UPFA) General Secretary Minister Mahinda Amaraweera said that they did not have any valid reason to cancel the agreement with the UNP and said that both parties had been able engage in their “separate politics” while being in a Unity Government.