The Petroleum Resources Development Ministry has reopened the ex-Cairn M2 block in the Mannar Basin for development and commercialization through a limited tender offer under a strategic plan to expedite oil and gas exploration and development, with an aim to license the block by early 2018 and begin production by 2021. “The government has now opened the Block M2 as part of a limited tender offer, to find a partner to appraise and develop the discovery of natural gas, as well as to explore for additional prospects,” the Petroleum Exploration Development Plan published by the Petroleum Resource Development Secretariat (PRDS) last week noted. 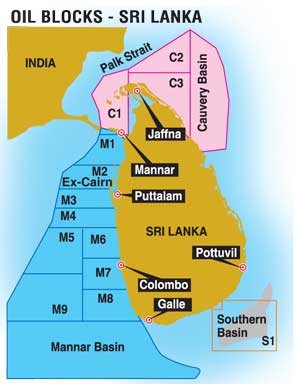 According to PRDS, this is based on a directive from Petroleum Resources Development Minister Arjuna Ranatunga to expedite oil and gas exploration and development.

“The economic analysis of these two discoveries indicates a very competitive gas price and about 11 oil and gas companies including few major exploration companies have already expressed their interest for this block and the government expects to license this block by early 2018,” PRDS said.

The block could potentially contain over 2 trillion cubic feet of natural gas and 10 million barrels of condensate, according to PRDS. Sri Lanka is moving away from coal to an energy generation plan focusing on natural gas and renewables. The first natural gas power plant to be constructed under this new policy is currently going through the procurement process.

However, due to the lengthy process of commercializing the M2 block, the government is expecting to import natural gas for power generation until the M2 block is ready to supply gas. The Public Utilities Commission of Sri Lanka had accounted for the M2 block to produce gas by 2023.

However, the PRDS gave a more ambitious estimate.

“The M2 block could be a reality by around year 2021, if the proposed bid round becomes a success and the natural gas potential timely tapped to be commercially feasible, for the commercial operations to commence,” it said.

However, PRDS said that the final timing of the production will depend on price negotiations with future investors and the government’s acceptance of a Field Development Plan (FDP) based on it.

The M2 block was explored by Cairn Lanka (Pvt) Limited, a subsidiary of Cairn India Limited, after it won the block as the sole bidder in the Mannar Basin blocks which were tendered in 2007.

The company then explored and drilled four wells in the M2 block in 2011 at a cost of US$ 240 million, and two of the wells were found to contain natural gas deposits instead of the expected crude oil.

Cairn decided to exit Sri Lanka and other foreign ventures in 2015 during the global oil glut, to refocus on its operations in India. Re-tendering the block was supposed to take place in the first quarter of 2016, but had run into numerous delays.

The oil and gas exploration and development plan also outlines the continuation of the joint study with France’s TOTAL for blocks off the East Coast, to obtain further data on several locations in the Mannar, Cauvery and Lanka Basins, and to call expressions of interest to explore several identified blocks in the Cauvery basin.

The plan also calls for the formulation of a natural gas policy encompassing all sectors with export potential to generate new business avenues and to price or re-price petroleum data to award remaining offshore blocks.

The UK-based WesternGeco has been conducting surveys of the off-shore blocks for some time.