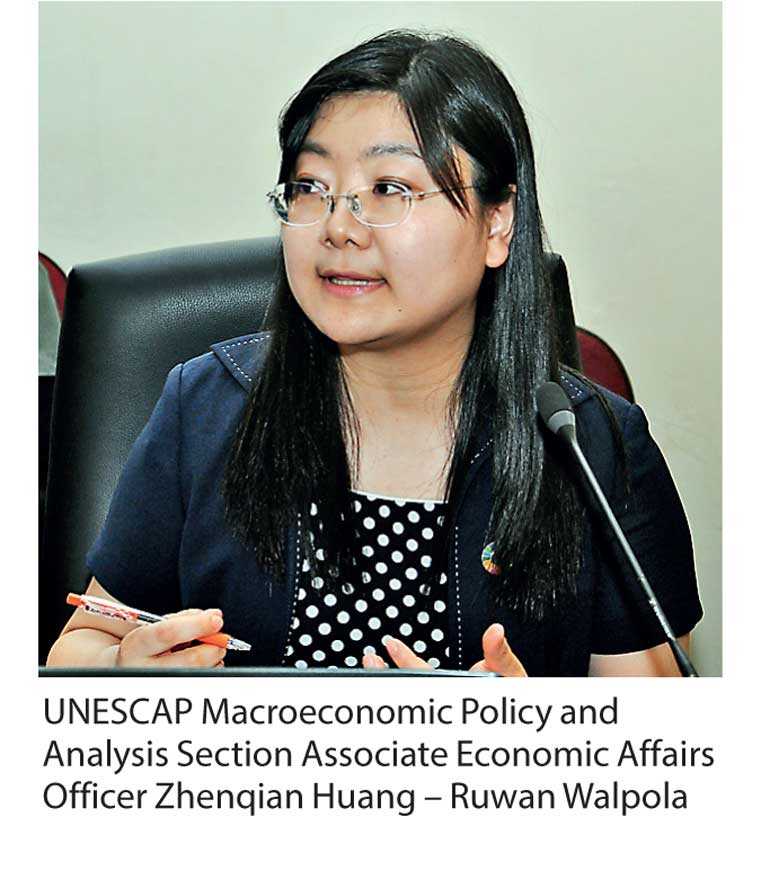 Sri Lanka is expected to grow at 4.8% in 2018, the United Nations Economic and Social Commission for Asia and the Pacific (UNESCAP) said yesterday, but will lag behind developing Asia Pacific economies that are projected to grow at 5.5% in both 2018 and 2019.

UNESCAP’s growth numbers are somewhat more optimistic than the World Bank’s, which has projected Sri Lanka to grow at 4.3%, and the International Monetary Fund (IMF) that has predicted 4%. Sri Lanka’s Central Bank has projected growth to be between 4.5% and 5% this year.

Despite the region as a whole expected to post staunch growth, with South Asia still leading the way, UNESCAP Macroeconomic Policy and Analysis Section Associate Economic Affairs Officer Zhenqian Huang said that vulnerabilities still remained and governments would need to be vigilant to maintain macroeconomic stability and achieve development goals.

“Supported by robust domestic demand and improved global economic prospects, developing Asia-Pacific economies are projected to grow by 5.5% in both 2018 and 2019, with a slight moderation in China offset by a recovery in India and steady performance in the rest of the region. In line with the region’s growing purchasing power, domestic private consumption is likely to remain the major source of economic growth,” she said.

However, in nearly half the countries in the region, consumption of the bottom 40% of the population, already substantially low, grew at a slower pace than that of the average household.

Consumer price inflation in the developing countries of the Asia-Pacific region is projected to rise to 3.5% in 2018 and 2019 compared with 3.2% in 2017. This increase is in line with higher global oil prices and stronger aggregate demand. Despite this pick-up, inflation is likely to remain steady at low levels.

Despite moderation in new trade-restrictive measures in 2017, there is a slowdown in new trade-liberalising measures both globally and within the region, the report warned.

Furthermore, there has been an increase in non-tariff measures, which are less transparent and could be more harmful. A rise in trade barriers may disrupt cross-border production networks, affecting not only trade but also long-term investments and productivity growth.

While trade liberalisation measures, pursued in a multilateral manner, are needed to bolster the contribution of trade to economic growth, efforts are also needed to address the social and environmental concerns related to trade and foreign direct investment, including complementary domestic measures to help adversely affected workers and firms. There remains substantial scope for South Asia and least developed countries to benefit more from trade.

“Dampening of capital flows to the Asia-Pacific region and associated financial vulnerabilities cannot be ruled out. So far trade balances have remained mostly manageable in the region, along with strong capital inflows due to the region’s economic buoyancy. However, trends could reverse rather easily given the recent economic recovery in the United States and the eurozone that could prompt faster-than-expected interest rate increases, resulting in asset price corrections and exchange rate volatility.”

The combination of a weaker United States dollar and higher oil prices over the past year are also a source of uncertainty and potential risks. While the weak United States dollar in 2017 has provided some space for other countries to adjust gradually to financial tightening, the baseline projection is that the dollar will strengthen on the back of a strong United States economy.

However, there is considerable uncertainty over its trajectory and net impact. Dollar strength has implications for trade competitiveness but also for dollar loans and dollar-denominated debt. Currencies pegged directly to the dollar are more prone to a potential negative impact, the report added. Rating agency Moodys has already placed Sri Lanka in a basket of countries that face increased credit risks if the dollar continues to appreciate.

With regard to the medium-term outlook, potential economic growth is on a downward trend in several countries owing to population ageing, slower capital accumulation and modest productivity growth.

The report advocated for monetary and financial policies to be focused on supporting a smooth transition to the expected gradual pickup in inflation and financial tightening prompted by stronger global economic growth, while tackling systemic risks in the financial system through appropriate macro-prudential measures.

“Consideration should be given to gradual increases in interest rates in the region’s economies. Central banks should also step up deleveraging efforts to address systemic financial risks and assign high priority to strengthening macro-prudential frameworks, regulation and supervision. Such measures are important in view of the high levels of private debt and distressed bank loans that are constraining robust investment. Fiscal policy should be focused on lifting productivity growth and reducing inequalities, as the need for near-term stimulus diminishes.”

After widening to nearly 3% of GDP in 2016, the fiscal deficit has stabilised in 2017 and is expected to narrow in the forecast period on the back of stronger economic growth. Moreover, a fiscal sustainability gap analysis by ESCAP suggests that government debt ratios will stabilise or decline in most countries in the baseline scenario. While these are encouraging, greater attention is needed to the composition and quality of government expenditures.

Lifting productivity will require a “whole-of-Government approach” for fostering science, technology and innovation and investments in relevant skills and infrastructure. At the same time, governments can consider a wide range of redistributive measures to mitigate the risks of technology-induced inequality and unemployment. Information and communications technologies (ICT) infrastructure is essential for supporting innovative growth and narrowing the existing digital divide and to develop core skills for people to be flexible and responsive to the rapid changes brought about by new technology.