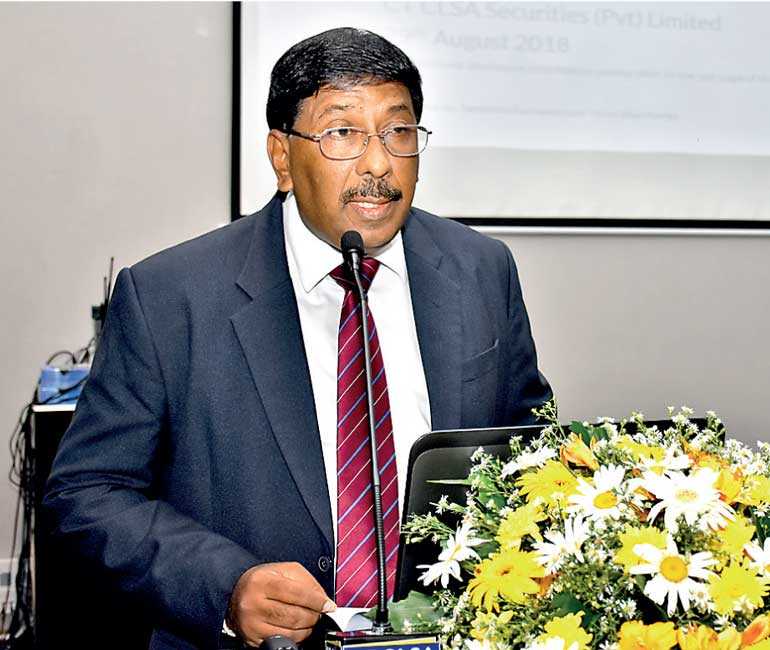 Sri Lankan banks have the stability and capacity to expand regionally and would be supported by progressive regulations from the Central Bank, assured a top official this week, but this would be coupled with the monetary authority stepping up action on non-compliance to improve the regulatory environment.

Speaking at a CT CLSA Securities event to launch a report on banking fundamentals, Central Bank Deputy Governor C. J. P. Siriwardana praised the sector and insisted it was stable and well-regulated.

Sri Lanka’s banking sector currently consists of 33 banks, of which 26 are licensed commercial banks, including 13 foreign banks and seven licensed commercial banks. Of these, six are systematically important banks maintaining assets over Rs. 500 billion each, accounting for 72% of the banking sector in the country. Out of the six systematically important banks, four banks were worth over Rs. 1 trillion and the remaining two are also poised to become Rs. 1 trillion-worth banks.

“So, in the future, we will call them the Trillion Bank Club,” Siriwardana said.

However, he warned that banks are likely to face growing challenges from shifting market dynamics and new technology, and advocated that they prepare assertively.

“But, we must not forget that the operating environment of the banking sector is more challenging now. The banking sector has continually supported economic growth by promoting financial inclusion in the country. This continues to be the priority of the Government and the Central Bank,” he said.

Commending the collective effort of banks in raising capital to meet Basel III standards, Siriwardana stressed that it indicated their ability to operate at a more advanced level.

“Our banks have raised capital, locally and internationally, to comply with Basel III, and this new development reflects their potential to fund large projects and mobilise funds for the international market at competitive interest rates. Additional capital requirement for the entire banking sector under Basel III was Rs. 120 billion and the companies were able to raise this amount. This means that our banks have the capacity to raise money more efficiently both in the local and international markets.”

Touching upon International Financial Reporting Standards (IFRS), and IFRS 9 compliance, he noted banks are expected to provide loan losses based on the expected credit loss, instead of the existing incurred loss approach to facilitate timely recognition of credit losses.

“However, the Central Bank will permit the cap under this regulation to be staggered over a three year period. Our aim is to safeguard banks, creditors and depositors.  We are very cautious in this area and the monetary board advice is to take immediate action on non-compliance issues shown by any banks or non-bank finance companies.”

Currently, the Central Bank is focusing on the avenues to impose and reinforce the regulatory and supervisory roles on corporate governance and ethics, customer care and fintech, block chain and cyber security.

“We need to be encouraged to tap into the growth potential of the financial sector, especially in the regional market. Today, our domestic banks operate in several regions and six banks are operating outside of Sri Lanka. We encourage them to expand further.”

“According to the International Banker’s Journal, the four Sri Lankan banks were ranked among the top 1000 banks. Ten years ago, we only had one bank and today, we have four. We are also seeing growing interest from foreign banks to establish their branches in Sri Lanka and this year, one of the top Chinese banks started their operations in Colombo. We want to see more banks joining the Sri Lankan banking system to steer the economic activities of the country in the future.”

The banking sector continued to dominate the financial sector accounting for over 60% of assets for the financial sector and its performance has remained robust. Total assets of the banking sector is estimated to reach Rs. 12 trillion by end-2018, and sharing about 80% of Sri Lanka’s GDP. Deposits as a percentage of total assets is 75%, and capital adequacy of the banking sector under Basel III has maintained a healthy level of about 16% on average and has strengthened when compared to end-2017, Siriwardana noted.

“However, we have seen marginal increase of non-performing loans this year from 3% to 3.33%, mainly due to weather-related factors that have impacted on the sector over the last one-and-a-half years.  Statutory Regulatory Asset Ratio of the domestic banking unit has remained over 30% this year, liquidity coverage was also maintained at around 151%, well above the required 90%.”