You are here: Home / Business Now / Sirisena one and only leader of SLFP: Dayasiri 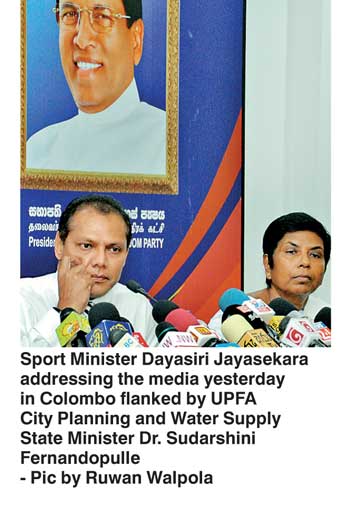 Adding to the confusion surrounding the Sri Lanka Freedom Party (SLFP)’s stance on abolishing the Executive Presidency, Sports Minister and SLFP heavyweight Dayasiri Jayasekara yesterday implied that while the party is not against abolishing the presidency, the consequences of doing so needs to be considered.

Responding to a question posed by Daily FT on the party’s conflicting position vis-à-vis the presidency, Jayasekara said that in light of a controversial statement made by the Northern Province Chief Minister C. V. Wigneswaran, the matter of the Executive Presidency needs to be pondered. He was speaking at the SLFP headquarters in Colombo accompanied by Deputy Minister of Higher Education Sudarshini Fernandopulle.

Wigenswaran had reportedly suggested earlier this week that the Northern Provincial Council independently explore the possibility of carrying out its own war crimes accountability mechanism.

“When [Wigneswaran and co.] make such statements, we have an issue with the presidential system. Once you abolish the presidency and fully devolve power to the provincial councils, what do we do then? In the end, if the presidency doesn’t get abolished – we’re not saying don’t abolish it, but if it doesn’t get abolished – we’ll have to find a candidate for the next presidential election. That’s the issue here. President Maithripala Sirisena may not be in favour of running again; we still don’t know what his position is. As far as we can see, he is the only leader of the SLFP. So we are of the position that we need to propose him as the next candidate,” he said.

It will take a while longer for the fate of the executive presidency to be decided, said Jayasekara, but when it does happen, the SLFP will have to consider the state of the nation at the time.

Once again alluding to the comments made by Wigenswaran, Jayasekara charged that such statements were aimed at dividing the communities and they were the words of NGO-funded cat’s paws of the LTTE. “How can we go forward as a country? LTTE supporters and NGOs want to sabotage this and tell the world that power cannot be devolved in Sri Lanka.  So we have to think twice about devolving power. We have always stood for devolution, but in light of these statements, we have had to think twice about it,” he said. When pressed again about the President’s well documented promise to be just a one-term president, Jayasekara said that despite this, Sirisena is now the leader of the party; therefore, he has to come out and say “I won’t run. You find someone to contest.”

“What we say is that we have no other leader and therefore he ought to contest. He can then say whether or not he’s against it,” he said.

Commenting on the newly formed Podujana Peramuna, Minister Jayesekara said that former President Mahinda Rajapaksa has been issuing conflicting statements about his involvement with the party.

“Anyone with a brain can understand what’s at stake here. [Rajapaksa] himself once said that it’s not because of Mahinda Rajapksa that the party prevails, but Mahinda Rajapaksa prevails because of the party. He expressed these sentiments at a Central Committee meeting too. Even a child can see that this is an attempt to split the SLFP. In whose interest are they acting like this?” Both Jayasekara and Fernandopulle urged SLFP members in the Joint Opposition to think carefully before making a decision which could hurt the party at the upcoming local government polls.

“Not only does this chain of events threaten to split the SLFP in two, but, if we’re being honest, all this is doing is basically giving the UNP what it wants,” said Jayasekara, adding that the reason legal action is not being taken against certain individuals may come to light in the near future.

The same individuals responsible for robbing the SLFP of victory in 1982 and 1989 are now conspiring to bury the SLFP, he charged.

“We urge our brothers in the Joint Opposition to think twice before making these decisions,” he reiterated.

“We need to stand together as one party. We call on SLFPers to unite,” said Fernandopulle.

Minister Jayasekara assured that the Sri Lanka Freedom Party (SLFP) is committed to ensuring the independence of the Attorney General.

“The Attorney General answers to Parliament. He can’t give answers to individuals – least of all answers they want to hear. We’re committed to protecting the AG,” he said.

“I believe that the AG is still acting independently. You can’t force him to give you the answers you want. We’re committed to ensuring his independence. The Joint Opposition need not worry,” he reiterated.

Referring to comments made by Finance Minister Ravi Karunanayake on the conduct of the Attorney General, Minister Jayasekara said that the AG’s documents have no secrecy aspect to them.

“He couldn’t possibly have a secret deal with the Finance Minister. The Minister asks for a piece of information from the AG. He has no right to ask; but he does, and the AG provides that information. But because there is nothing secretive about said information, he goes ahead and uploads it,” said the Minister, adding that there is nothing wrong with such an action.

“The RTI Act is now law. Any public official can now upload their information to the web. What’s the point in passing RTI otherwise? The AG had the right to upload it,” he added.