You are here: Home / Business Now / Sagala gets tough on southern tourism trade 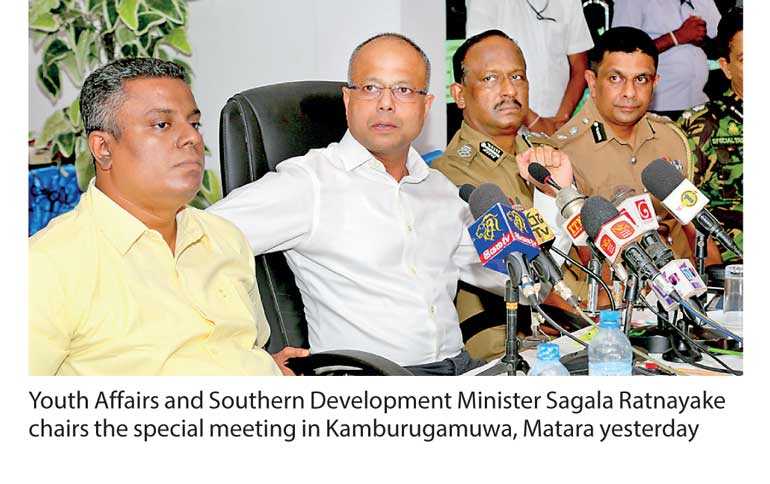 In a hard-hitting move Southern Development and Youth Affairs Minister Sagala Ratnayake directed all hotel and restaurant owners in the Southern Province to strictly adhere to the registration process of the Sri Lanka Tourism Development Authority (SLTDA).

He pulled no punches while addressing a gathering of around 100 tourism industry stakeholders of the Southern Province and government officials at a meeting held in Kamburugamuwa, Matara yesterday in the wake of the assault and alleged sexual harassment of four young Dutch tourists and four Israeli nationals by local ‘beach boys’ in the tourist hotspot of Mirissa and Midigama.

“All hotels, restaurants, eating places, liquor shops, surf equipment hiring centres, home stay units and other services related to tourism must register under the umbrella of the SLTDA,” he said.

He also urged the Government authorities to fully enforce law and order for liquor shop operators using the Excise Department regulations as well as for events operating loud speakers to prevent sound pollution.

The Minister directed all tourism industry stakeholders in the area, together with government institutions, to setup a committee to uplift the tourism sector in the province headed by the Southern Development Board.

The first meeting of the committee is scheduled to be held on 26 April at the Divisional Secretariat Office in Weligama, Matara.

Noting that what happened in Mirissa and Midigama was unwarranted, he stated that it tarnished the goodwill of Sri Lanka Tourism.

Ratnayake said he would have further discussions with the Tourism Development Minister and Law and Order Minister to ensure the safety of tourists as well as to develop the lucrative tourism industry in the Southern Province.

In addition, tourism industry stakeholders in the area also lamented about their woes and challenges to the authorities, particularly with regard to lack of space, loud parties which create sound pollution and the cultural issues they face.

Three Israelis have been attacked with sticks by locals in Midigama, a surfers’ town in Sri Lanka.

An Israeli woman who was surfing accidentally hit a local surfer and injured his hand. The man demanded compensation to cover his medical bills.

According to reports, the injured local got into an argument with the woman’s Israeli friends, and a brawl broke out.

Local police said a group of locals then attacked the Israelis. The police launched an investigation into the incident.

The Police’s Media Unit said yesterday the identification parade of the nine suspects linked to the assault and alleged sexual harassment of four young Dutch tourists by local ‘beach boys’ at the pub of a surf club in the tourist hotspot of Mirissa has been postponed to 3 May as the witness had failed to turn up in courts.

Weligama Police arrested six suspects on 13 April in connection with the assault and alleged sexual harassment of four young Dutch tourists, while another three persons were arrested on 17 April linked to the same incident.

In addition, four suspects connectedto the assault of four Israeli nationals on 15 April at Midigama beach were arrested by the Weligama Police. The first suspect was arrested on 17 April, while the other three were arrested on Wednesday (18). The four suspects in remand custody will also be produced at an identification parade on 26 April at the Matara Magistrate’s Courts.

The Police Media Unit said a total of 13 suspects linked to the Mirissa and Midigama incidents are in remand custody where tourists were assaulted by local beach boys.

The Sri Lanka Tourism Development Authority (SLTDA) ordered the closure of the restaurant and beach bar in Mirissa in question, where several Dutch nationals were assaulted and allegedly sexually harassed. It was revealed that the restaurant was operating the bar without a licence.

Hotels Association of Sri Lanka (THASL) President Sanath Ukwatte claimed the beach boys were part of a huge “mafia” in the south coast which was backed by local politicians.

Police had identified 20 highly touristic areas, including Mirissa, in which to establish Tourist Police Units, with at least 15 officers assigned to each unit. (CdS)