Rescue workers cleared mud and debris from a landslide at a giant rubbish dump in the Sri Lankan capital for a fourth day on Monday, as the death toll rose to 29 and uncertainty remained over the number of people missing.

The 300-foot-high (90-metre) dump in the Meethotamulla area on the border of the commercial heart of Colombo collapsed after flames engulfed it late on Friday, the country’s official New Year’s day, burying many homes.

Military spokesman Roshan Senivirathna said that rescue workers will have to dig deeper to recover the dead but that they have no idea how many people may still be missing. 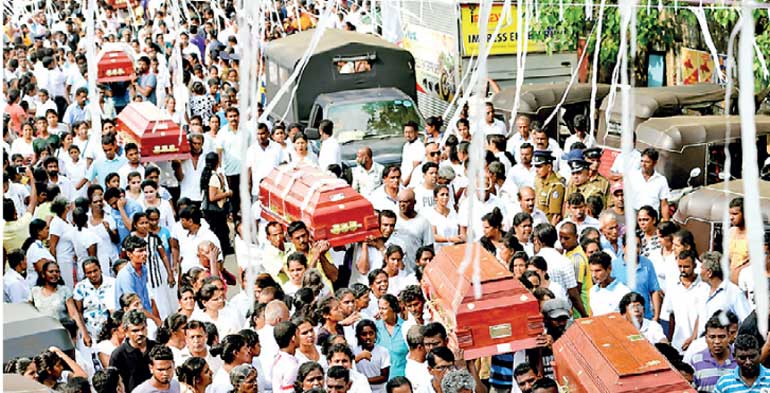 Sri Lankan families carry the coffins of victims who died following the collapse of a garbage dump in Colombo on 17 April 2017. Sri Lanka has moved over 400 families to temporary shelters after tonnes of rotting garbage collapsed onto a slum on 14 April, killing at least 28 people – AFP

“The hill came down in quite a strong manner where in some areas we had to dig up to 20 feet, and in some areas it might be little further. Depending on the information we get from the people.. we can continue our process,” he told Reuters.

Residents still say around 100 people may be missing, but the state-run Disaster Management Centre (DMC) revised down its own figure for the missing to 11 from an initial 30.

Both the military spokesman and a DMC official said the death toll had reached 29. Pradeep Kodippili, a spokesman for the DMC, said the number of missing was revised down after going through information on the area residents from government offices.

“Some of the dead people’s names were in the missing list and we removed those names,” Kodippili told Reuters.

The authorities have ordered a stop to garbage dumping at the nearest site, the largest in the country, where 800 tons of waste is dumped on a daily basis, mainly from Colombo city.

The finance ministry is considering compensation for the victim’s families and for those whose houses were damaged in the landslide.

The rescue team of more than 1,000 military personnel halted the search late on Monday and expected to resume on Tuesday.

The police are investigating whether the landslide was natural or man-made.

Residents of the area, mostly living in shanties, had been demanding the removal of the dump, saying it was causing health problems. The government had said it would remove it as part of an infrastructure plan.