You are here: Home / Business Now / Reconciliation will only strengthen national security: CBK 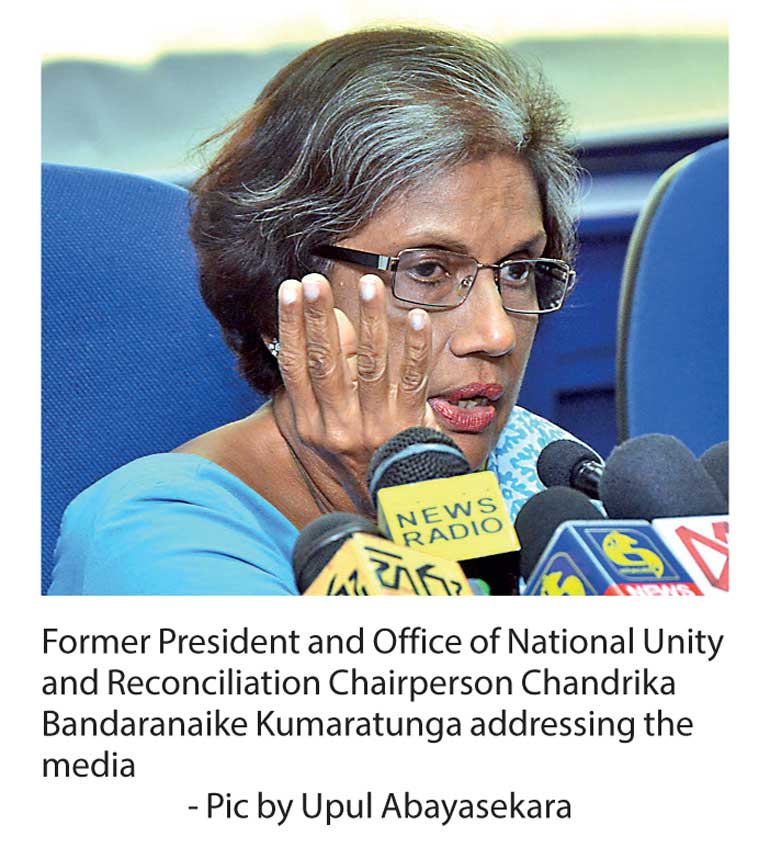 Presenting the recently Cabinet-approved National Reconciliation Policy to the media, former President and Chair of the Office for National Unity and Reconciliation (ONUR) Chandrika Bandaranaike Kumaratunga said that reconciliation will only serve to strengthen national security rather than compromise it.

Fielding questions at a special press conference held in Colombo, Kumaratunga said the Security Council continues to meet regularly with the participation of the President, the Prime Minister and the tri-forces commanders to discuss matters relating to national security and, contrary to what she says are alarmist statements made by parties with vested interests, there is no problem whatsoever in that regard.

“What reconciliation does is prevent future threats to national security from cropping up. If we don’t do this now, there could be another war in the future,” warned Kumaratunga.

She said reconciliation alone will ensure that there will be no opportunity for separatist causes.

Asked to comment on allegations of prosecuting war heroes, the former President said that the soldiers currently under investigation were apprehended not for their part played in the war but for their alleged involvement in the extrajudicial killings of journalists and political opponents of the previous regime.

Some of those soldiers were used by officials to target their opponents, she said, adding that being a soldier alone was not enough of a reason not to arrest an individual accused of wrongdoing. When asked why the said officials are not being arrested instead, Kumaratunga said that the soldiers who carried out the orders needed to be taken into custody in order to gather evidence admissible in court, against those who gave said orders.

Elaborating on the new National Reconciliation Policy, Kumaratunga said that some of the major suggestions contained in the document are already in the process of being implemented by the ONUR in conjunction with other relevant ministries.

Special interactive programs are underway, she said, to educate children from different parts of the country on the importance of reconciliation. A second phase of these programs will include similar awareness programs for adults as well as members of the clergy. Arts and culture too will be used, she said, to build bridges and promote reconciliation.

“We also talk about the need for a new constitution or an amended constitution to guarantee the rights of the minorities. That is in the process. It is a bit slow, but it is going forward, we hope. That’s in the hands of the Parliament and the Government,” said Kumaratunga.

Responding to a question posed by Daily FT on comments repeatedly made by Sri Lanka Freedom Party (SLFP) ministers on a decision by the party to not support any amendment to the constitution that will require a national referendum, Kumaratunga said: “I don’t know whether it’s a statement from the SLFP or individuals of the SLFP, because to my knowledge the SLFP has not taken any such decision formally. But why such individuals talk like that, I don’t know, I cannot explain. I have protested at this and I don’t agree with them.”

The policy spells out a set of policy principles defined as a set of actionable principles and long-term goals that will “form the basis for making rules and guidelines, and to provide overall direction to planning and development for national reconciliation.”

According to the ONUR, these include, among other things, equality, human rights, justice and rule of law, transitional justice, inclusivity and diversity, sustainable development and civic consciousness. Among the areas identified as being critical to implementing reconciliation programs are conflict sensitivity, cross-cultural awareness, victim-centredness, gender responsiveness, foresight and innovation, leadership and sustainability, efficiency and effectiveness, coordination and complementary, clear and consistent communication.