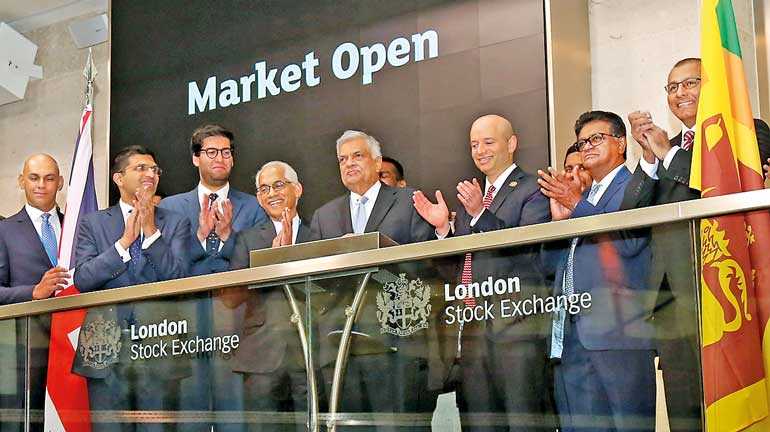 By Nisthar Cassim in London

Giving a fresh impetus to longstanding and growing bilateral ties with the United Kingdom, Prime Minister Ranil Wickremesinghe yesterday inaugurated the trading of the London Stock Exchange (LSE), one of the world’s oldest, which has a growing investment in Sri Lanka.

The symbolic yet significant start of trading was ahead of the Invest Sri Lanka Investor forum organised by the Colombo Stock Exchange (CSE) and the Securities and Exchange Commission (SEC) and also hosted at the LSE and attended by over 100 fund managers and investors.

Speaking after the opening of the LSE, the Prime Minister said Sri Lanka was living in a transformative and challenging time and the Government had decided to face it not by taking a step back but going forward on reforms and internationalisation of the Lankan economy.

He revealed that the draft law for the offshore Colombo International Financial Centre was nearing finalisation and further reforms were in the pipeline enabling more entrants to capital market. “The CSE will have smiles on their faces soon,” Wickremesinghe said, apparently referring to a possible return of biggest fund EPF to the stock market, though with stricter new guidelines.

The Premier also told the opening of LSE trading that Sri Lanka had achieved improved economic results in the past three years despite challenges and endeavoured to offer relief to the people as well.

Earlier in his speech Wickremesinghe said he was pleased by the cooperation between the LSE, which he described as one of the “hallowed institutions” in the UK, and the CSE.

He recalled that it was a proud achievement for Sri Lanka to have locally-developed software technology by MillenniumIT powering the LSE and several other international stock exchanges. MiT was subsequently acquired by the LSE.

LSE Group CEO David Schwimmer said its investment in Sri Lanka had progressed well and the Group continued to expand, employing over 1,000 people in its facility in Malabe.

He said despite challenges the Sri Lankan economy had progressed and expressed optimism over the Government’s Vision 2025. “London is well placed to support Sri Lanka’s growth ambitions and the Government’s development agenda. We remain committed to Sri Lanka and are also proud of our partnership with the CSE,” the LSE Group CEO emphasised.

LSE is a diversified international market infrastructure and capital markets business sitting at the heart of the world’s financial community. The Group can trace its history back to 1698.

The Group operates a broad range of international equity, bond and derivatives markets, including the London Stock Exchange; Borsa Italiana; MTS, Europe’s leading fixed income market; and Turquoise, a pan-European equities MTF. It is also home to one of the world’s leading growth markets for SMEs, AIM. Through its platforms, the Group offers international businesses and investors unrivalled access to Europe’s capital markets.

The LSE Group is a leading developer of high performance trading platforms and capital markets software for customers around the world. In addition to the Group’s own markets, over 35 other organisations and exchanges use the Group’s MillenniumIT trading, surveillance and post trade technology.

Tomorrow a smaller forum will be held in Scottish capital Edinburgh.

The CSE-SEC forums are held in partnership with the Sri Lanka High Commission in UK, the International Chamber of Commerce (ICC) UK, and Sri Lanka.