Former President Mahinda Rajapaksa yesterday launched a broadside against several Government moves, including the new counterterrorism act and the UNHRC resolution, and slammed the Constitution formulation process as an effort to create a separate state. 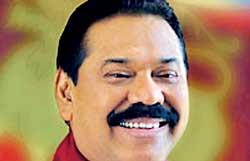 The Government’s efforts to fundamentally change the Constitution, the law and the structure of the Sri Lankan State are expected to come to the fore in the months ahead. Since November last year, several documents that have either been officially released or have come to light by other means, reveal very clearly the intentions of the Government, he said in the statement.

“The fountainhead of the four documents mentioned above is the UN Human Rights Council resolution of October 2015 which was brought against Sri Lanka by the Obama administration and the European Union and co-sponsored by the yahapalana government. Even though a radical regime change has taken place in the USA since then, the yahapalana government has not taken any steps to hold talks with the new US administration and to get the resolution against Sri Lanka amended,” it charged.

“It thus becomes plain that the yahapalayakayas co-sponsored this dangerous resolution in 2015 not only due to pressure from foreign parties but also because of their intrinsic anti-national leanings. It should be borne in mind that as of this moment it is not the American government that is carrying forward the resolution against Sri Lanka, but our own government.”  The statement claimed the Task Force on Reconciliation has recommended that apologies should be tendered by the Sri Lankan State to the victims of the armed conflicts that took place in this country but it would not require any terrorist organisation or political groupings that backed the terrorists to tender apologies to anybody.

“As a means of promoting reconciliation, all LTTE detainees who have not been charged under the PTA or other laws are to be released forthwith while members of the armed forces suspected of committing crimes are to be arrested.”

Despite numerous denials by the Government, Rajapaksa persisted in insisting that a war crimes tribunal with foreign participation would be set up to try members of the armed forces.

“According to the recommendations of the Subcommittee on Police, Law and Order, if a state of emergency is to be in force continuously for a period in excess of three months or for a period of more than 90 days within a period of 180 days, the extension of the state of emergency will require a ‘special majority’ in parliament. The Supreme Court will be empowered to review and even annul orders imposing emergency and the emergency regulations that come into effect through such orders, thus restricting the powers of the executive in responding to breakdowns in law and order. No consideration has been given to the question of how law and order can be maintained by hogtying the executive, the police and the armed forces in this manner.”

The Subcommittee on the Judiciary has recommended that appeals to the Human Rights Committee in Geneva be allowed by changing the law applicable to the incorporation of international treaties into local law. Thereby the Supreme Court of Sri Lanka will cease to be the highest court in the land because the Human Rights Committee will have the power of review over Supreme Court judgments. The subordination of the highest court to an international court entails a loss of sovereignty, the statement insisted.

“The Subcommittee report on Centre Periphery Relations has recommended that the powers of the provincial governors be abolished and that they be appointed with the concurrence of the chief ministers and required to perform their duties according to the chief minister’s instructions. The Governors uphold the writ of the government in the provinces. If his powers are diminished, Sri Lanka will automatically become a federal state.

“If these provisions are implemented, what we will be left with will be a fragmented Sri Lanka made up of nine federal states with a very weak central government which is legally prevented from responding effectively to situations of internal disorder. From that point, it will be just one step towards a separate state.”

The statement also alleged the “Eelamist lobby” is working together with “certain foreign powers skewed the result of the 2015 January presidential election to bring into power a Government through which they hope to achieve what could not be won through four decades of terrorism.”

“I invite all SLFP members in the government, and parliamentarians of the UNP as well, to read the five documents mentioned here and to decide for themselves whether they want to betray the country and the nation by supporting this traitorous agenda.”

The main constitutional pledges given to the people at the last presidential election were the abolition of the executive presidential system and electoral reform, Rajapaksa noted.

“The reason why the government is pursuing the above mentioned agenda with great enthusiasm while completely ignoring the constitutional pledges they gave to the people is obviously because they have other, more important masters to please than the people of this country.”