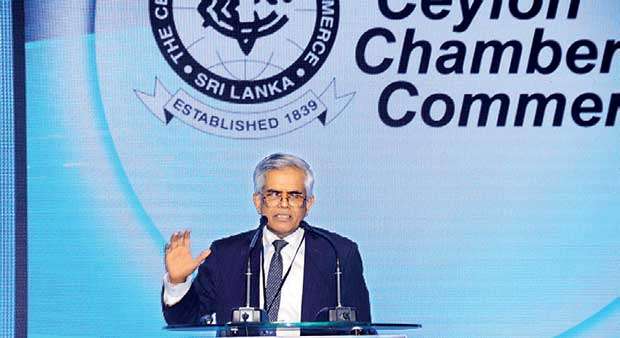 Sri Lanka’s recurrent expenditure on public sector salaries and pensions will account for 44 percent of the government’s revenue this year across
1,251 entities due to the ever expanding bureaucracy, a top bureaucrat in the country revealed.

Participating in a panel discussion titled ‘Energizing the Bureaucracy’ at last week’s Sri Lanka Economic Summit 2018, Treasury Secretary Dr. R.H.S  Samaratunga said the Treasury is expected to spend around Rs.900 billion on salaries and pensions of public sector employees in 2018, out of the government’s expected revenue of Rs.2, 040 billion.

He stressed that the expansion of the country’s bureaucracy further hinders the government’s effectiveness.”

“Although we are a small country, the size of the government is huge and you can just imagine the complexities. Just imagine the level of coordination that would require.”

The government expenditure on public sector salaries is to further increase as plans are afoot to recruit more unemployed graduates. A salary increase for the public sector is also anticipated in the budget 2019.

There are about 57,000 unemployed graduates registered with the government (end of 2016), who would be prioritised when recruiting for State sector vacancies.
President Maithripala Sirisena recently appointed a special Salaries Commission to study discrepancies of public sector wages and to formulate a national policy due to demands raised by trade unions.

The Committee is likely to recommend a salary hike for the public sector in the upcoming budget.

“The government is not a company; we are a rule-based organisation and we are accountable to Parliament and to the public eventually. So when the government expands, bureaucracy gets enlarged and the outcome you expect is going to be very difficult to be achieved,” Dr. Samaratunga pointed out.

He said that bureaucracy is entrenched with 1950’s-1970’s thinking where the young bureaucrats have to wait decades to reach the top level of the ladder.
“The young and able decision makers should come to the hierarchy of the bureaucracy fairly quick— of course with adequate amount  of training and learning—and not at the end of their 50’s or 60’s.  Perhaps they should come to the top level when they reach 40-45 years, that has to be developed nationally,” he said.
Participating in another session at the Sri Lanka Economic Summit 2018, the State Minister of Finance Eran Wickramaratne also stressed that the public sector is in dire need of reforms and highlighted that public sector reforms have to be the top priority of the next President of Sri Lanka.