Professional associations are among local stakeholders that restrict progressive policies on education as they are focused on profession-specific requirements rather than what benefits the whole of society, State Minister of Finance Eran Wickramaratne said yesterday, calling for a holistic outlook that delivers social equity to everyone.

Speaking at a forum titled ‘Budget Proposals for 2019/2020 for Human Capital Development’, organised by the National Human Resources Development Council (NHRDC), Chartered Accountants of Sri Lanka, the International Chamber of Commerce and the Daily FT, Wickramaratne pointed out that Sri Lanka was still engaged in ideological battles regarding its taxpayer-funded education and healthcare systems.

“Sometimes in a guise of equality we may be doing things that are not very equal,” he warned.

“Some of the barriers are ideological struggles that Sri Lanka is still engaged in. I remember when a private medical school was started in Ragama decades ago and it is a pity that the government of the day caved into demands. It is this same battle that we fought in the 1980s that we are fighting today. What people require is quality education. The provider of the education is secondary. Governments anywhere will not be able to meet this demand for quality education. Therefore we have to open this space up. The other thing we have is professional barriers, we need to take responsibility that some of the barriers created in the system are by us, consciously or unconsciously,” he told the audience.

Wickramaratne was candid in his evaluation of the lobbying done by numerous professional organisations that have recently been protesting liberalisation and Government efforts to ink free trade agreements, arguing that local professionals would lose out on lucrative jobs if foreigners were allowed to work in Sri Lanka.

“Education is a great leveller and therefore those of us who have had that privilege and have occupied a position in society did so because of the free education system. This is true for me as well. Those of us who have gotten there need to make sure the door is open to everyone else. The problem with professionals is that we think about our profession rather than society at large and therefore lots of professional barriers are thrown in the way of creating a more equal society. We have to question every single move that we make as professionals and professional associations. Are we really creating a more educated, skilled Sri Lanka? Or have we become part of the problem?”

The State Minister went on to insist that Sri Lanka had to become more competitive to attract more investment and increase exports. He stressed that in the long term Sri Lanka’s advantage had to become human resources because as a 20 million population the internal market would not allow for high living standards. Sri Lanka cannot achieve this by being protectionist, he emphasised.

“We need to skill ourselves so we can compete. There is no other way for this country. This is not to take away from what we have already achieved but I must tell you I am not satisfied. I think our health sector has a long way to go in terms of quality. It’s not what we say about ourselves but what others say about us that really matters. If you do a patient survey in this country, and I’m not referring to people who have access to private healthcare, I’m talking about those that use public healthcare, if you do a survey of them you would find out about the true state of our healthcare. It is the same with education.”

The State Minister pointed out that only about 350 schools were under the Central Government but over 9,500 schools were administered by provincial councils and this underlined the resource divide in the education sector. The rural schools give a stark picture of quality, he observed. More needs to be done at the kindergarten, primary school and higher levels, including the healthcare of students.

Wickramaratne pointed out that since the Government was elected they had increased Budget allocations for education and healthcare as a percentage of Gross Domestic Production (GDP) but this was insufficient to meet the quality demands of the masses.

“Since we were elected we have increased allocations to education and healthcare. This is the challenge. We are politicians and politicians are elected by the people. But when people ask what we have done, investment in education and healthcare cannot be seen. But if you build a road it can be seen. We need to put some of those resources in education because human resource development is crucial for Sri Lanka.”

Australian High Commissioner Bryce Hutchesson gave insights on the vocational training system followed in his country and advocated that the private sector should be integrated to give direction to the effort and also contribute to funding different programs.

“Our vocational training system is strongly integrated with the private sector. This is a critical point. Industries need to quickly integrate with a vocational training system to ensure that people are not acquiring skills that are not relevant to the current needs of the workforce or the current needs of the economy. We think our system does provide practical skills and qualifications and helps businesses grow. We have a council that sets the strategic direction for the training and responds to market pressures. It is also responsible for skills development and national training arrangement.”

The strength of the system is that it provides a voice to the private sector to highlight its needs. Funding is through a complex system that includes public and private contributors with about two-thirds coming from the national government but a significant share comes from the students themselves, he noted. Students are provided with loans to fund their own vocational training and these loans are given long grace periods so that students have the time to reach a stable income level before they have to complete repayment, which is interest-free but adjusted for inflation. Employers are also encouraged to participate in vocational training. About 55% provide vocational training but the number has improved from 20%, but the High Commissioner acknowledged it was a challenge to get small businesses involved.

Education must be aligned with economic goals 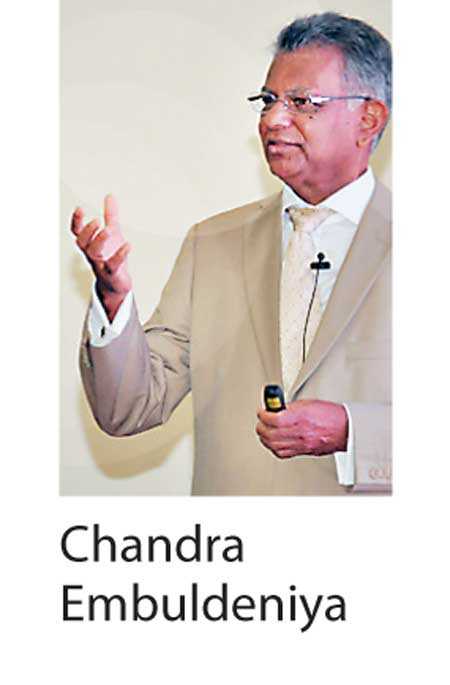 Presenting the key findings of three years of research, Dr. Embuldeniya noted that a resource gap existed between schools under the Central Government and provincial councils. Only about 350 schools were under the Central Government, which made them much sought after while over 9,500 schools in the provinces were given limited access to resources or well-trained teachers. He also pointed out that despite billions of rupees being allocated to public education, a significant mismatch existed between graduates and growth areas of the economy including key services such as healthcare.

“More than 52% of our graduates are arts students. About 19% are commerce graduates but only 9.6% are from science, 4.9% are engineers and only 3.7% are doctors. It is clear we need to understand how our public money is being spent at the tertiary and higher education level and whether it is resulting in the best gains for our economic needs. We need to change the system to give people skills that are useful,” he said, highlighting data gathered from 30,819 graduates in 2016.

He also pointed out that despite significant public spending, admissions at public schools were dwindling as parents sought higher quality education for their children. Higher education and vocational training schools were also not faring much better with some having dropout rates as high as 30%, he said, advocating that when public funds were allocated they must also monitor student performance.

Dr. Embuldeniya also lamented the lack of readily available data on Sri Lanka’s widely varied education sector, insisting that policy implementation needed to be more data-driven if it was to meet economic goals. He also called for the private sector to be encouraged to become an education provider by giving access to public funds, creating a one-stop shop for education-related investments, introducing a voucher system so all students could get public funds that would partly pay for them to get education at an institution of their choice and improve access to finance so students could obtain loans. He also supported public-private partnerships to rapidly expand quality education across the country.

“Our education system has become focused on academic outcomes rather than on outcomes that are based on behaviour. We have to change the ideologies of people, encourage career guidance counselling, promote staff development, allow high quality international academics in Sri Lanka and give international accreditation,” he said.

He also called for university education to begin six months after Advanced Level exams and allow public universities to absorb foreign students up to 5% of their intake.

One aspect that was looked at in the research was to improve female participation in the workforce which called for legal reforms, human resource policy interventions and incentives for the private sector to hire more women.

“We also looked at how to reduce productive workers becoming three-wheeler drivers. It would be good to set up a talent corporation with the private sector to mainstream relevant jobs, reskill existing drivers to enter the tourism services industry and develop an employment value proposition for them in different sectors.”