Moments after a speech on Tuesday (28) in which he blamed extremists on both sides of the ethnic divide for stalling Sri Lanka’s reconciliation process, Foreign Minister Mangala Samaraweera was briefly accosted by a member of a pro-LTTE group at the Palais des Nations, the building that houses the United Nations in Geneva. 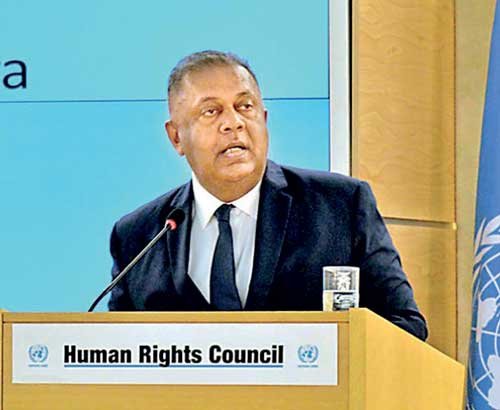 The Minister was walking out of Room XX where the Human Rights Council sits after his speech was filmed by the Tamil Diaspora representative when he stopped for a brief interaction with President of the Global Tamil Forum, Fr. S.J. Emmanuel.

An extreme Tamil Diapora political formation, the TGTE purports to be a “government in exile” representing the Tamil homeland in Sri Lanka.

The recording of the interaction with the Sri Lankan Foreign Minister at the Palais on Tuesday has been shared on social media by TGTE representatives and like-minded groups.

On Tuesday, TGTE held a panel discussion at the Geneva press club on the sidelines of the UNHRC 34th Session, in which its foreign experts called for Sri Lanka’s referral to the International Criminal Court in The Hague.

Minister Samaraweera and President Maithripala Sirisena have stepped up engagement with the more moderate sections of the Tamil Diaspora, including representatives like Fr. Emmanuel and Suren Surendiran from the Diaspora organisation umbrella group GTF. This engagement has been roundly criticised by the more extreme sections of the Tamil Diaspora, which view those engaging with the Government of Sri Lanka as traitors to the Tamil nationalist cause.

In his speech at the UNHRC’s 34th Session on Tuesday, Minister Samaraweera explained how his Government was facing fire from both Tamil and Sinhalese extremists on their transitional justice agenda. These groups were stubbornly refusing to acknowledge progress made, the Foreign Minister said, and accused the Government of moving too fast or too slow on reconciliation.

“As we move forward on this journey, the forces of extremism and regression on both sides of the divide are creating roadblocks for narrow, short-term gain,” the Minister told the 47-member council in Geneva.

Minister Samaraweera held discussions with GTF’s Fr. Emmanuel at the Palais des Nations on Tuesday afternoon, on the sidelines of the UNHRC session. The meeting had been cordial and constructive, the Minister said.