You are here: Home / Business Now / President vows SLFP will rise again with power of the youth

President Maithripala Sirisena says the Sri Lanka Freedom Party (SLFP) will rise again with the power of the youth to lead the country in a genuine political journey. 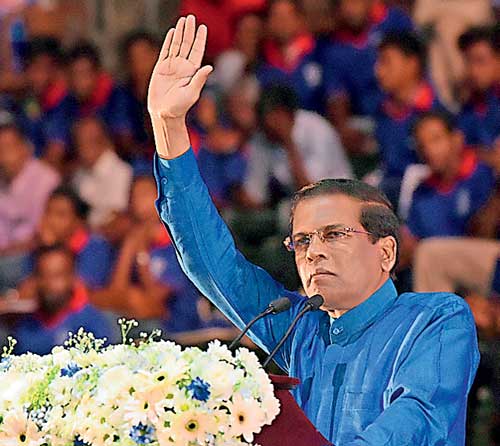 The National Youth Convention of the Sri Lanka Freedom Party (SLFP) was held under the patronage of President Sirisena at the Sugathadasa Indoor Stadium in Colombo on Sunday under theme ‘Strength for the solution’. Over 12,000 youth from all corners of the country participated in the National Youth Convention, organised by the party’s Youth Front after a lapse of 13 years.

Speaking further, the President said the political thirst of the young generation as well as the public of this country was to see an honest, energetic and clean political movement. He emphasised that he would not hesitate to take action against those who were charged with fraud, corruption and the misuse of State funds and resources, irrespective of their political affiliations.

President Sirisena further said that he accepted the Sri Lanka Freedom Party (SLFP) Chairmanship not to crown any of his family members but to lay the foundation in ushering in a prosperous future for the country. He questioned as to why he was being obstructed by certain persons from taking the party forward after he was offered the SLFP Chairmanship.

Praising the thousands of young who attended the convention, the President said the successful youth conference provided strength for the forward journey of the country.

“Your attendance today gives enormous strength to correct the course of the Government, and give a clear message to the Government for the right path,” the President said.

During the National Youth Convention the report of the SLFP Youth Front and the first copies of the Visaduma book and Nidahas newspaper were presented to the President.

The souvenir issued to mark the National Youth Convention of the SLFP was also presented to the President during the event.