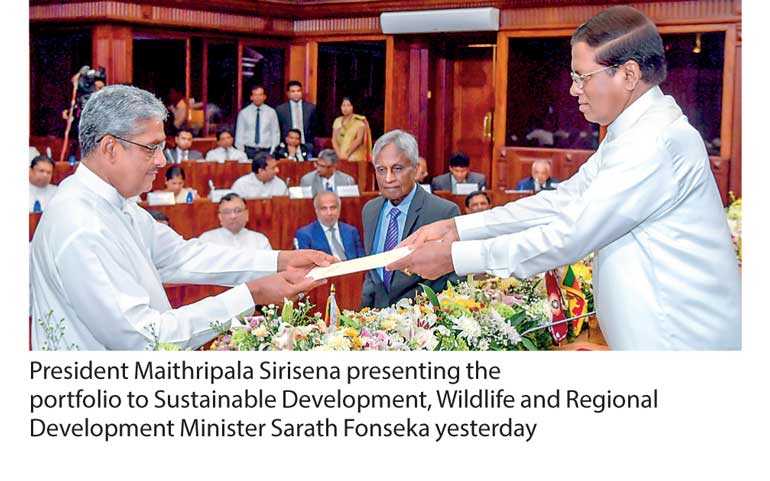 Cabinet changes made yesterday by President Maithripala Sirisena held few surprises with most of the key ministries remaining unchanged with the exception of MP Wijeyadasa Rajapakshe who returned to Cabinet as Higher Education and Cultural Affairs Minister.

The six Sri Lanka Freedom Party (SLFP) Cabinet members who had voted for the no-confidence motion against Prime Minister Ranil Wickremesinghe in early April were noticeable absentees in the new portfolio distribution with their subjects being redistributed amongst new appointees. The Samurdhi and Labour portfolios, which were earlier held by the SLFP, were also given to United National Party (UNP) members. Former Foreign Minister Ravi Karunanayake, who was widely speculated to make a comeback along with Rajapakshe, was perhaps the most significant name missing from the line-up.

Predictably, Opposition parties were critical of the reshuffle, with the Joint Opposition charging that there had been no positive change and only a change in personalities.

“We have only seen a change in personalities. No positive change has taken place to correct the present collapse of the economy and Governance,” Joint Opposition Parliamentary group leader MP Dinesh Gunawardana told the Daily FT.

The Janatha Vimukthi Peramuna too said that it did not see any significant change in the new Cabinet from its previous iteration.

“There is no difference in the Cabinet that we can see. Nothing special about the reshuffle thus far. We will have to see if any significant changes are made to the Deputy and State ministerial portfolios,” said JVP MP Sunil Handunetti.

The reshuffle also failed to impress some market watchers who were hoping that the Cabinet would signal an end to political uncertainty which had prevailed since the coalition government saw a setback in the Local Government elections on 10 February.

Investors had been waiting for a Cabinet reshuffle since 12 April when Sirisena, in the wake of the failed no-confidence motion, suspended Parliament until 8 May.

“The changes are very cosmetic. There is nothing to boost the market,” said a stockbroker in Colombo where the stock index ended flat yesterday, Reuters reported.

“The country does not need a Cabinet reshuffle at this point, but reforms to restructure the country,” said Victor Ivan, an independent political columnist was quoted as saying by Reuters.

The reshuffle has been questioned by some analysts for failing to live up to President Maithripala Sirisena’s promise of ministries being assigned in a scientific manner, with key subjects such as Education and Higher Education remaining under two separate ministries.

Senior Analyst and Head of Politics at think tank Verite Research, Janeen Fernnando, pointed out that Sri Lanka had a continuous issue of bunching different subjects under one ministry resulting in impaired administrative structures.

“While some changes in the Cabinet reshuffle lent themselves towards the much discussed ‘scientific approach’ such as merging Justice and Prison Reforms and de-linking Higher Education from Highways, it remains very limited in scope and very much a reshuffle rather than a transformation. Sri Lanka has faced chronic problems of poorly structured and often fragmented ministries with government departments that may logically be housed together separated causing significant disruptions and impediments to both policymaking and the public’s ability to obtain government services. The most recent reshuffle does not address any of those longer-term concerns,” Fernando elaborated.

The reshuffle took place at the Presidential Secretariat last morning with the swearing in ceremony commencing at around 10.45 a.m.

Minister Mano Ganesan, in addition to being the Minister of National Co-Existence and National Languages, was also given the Ministry of Reconciliation, held previously by President Sirisena.