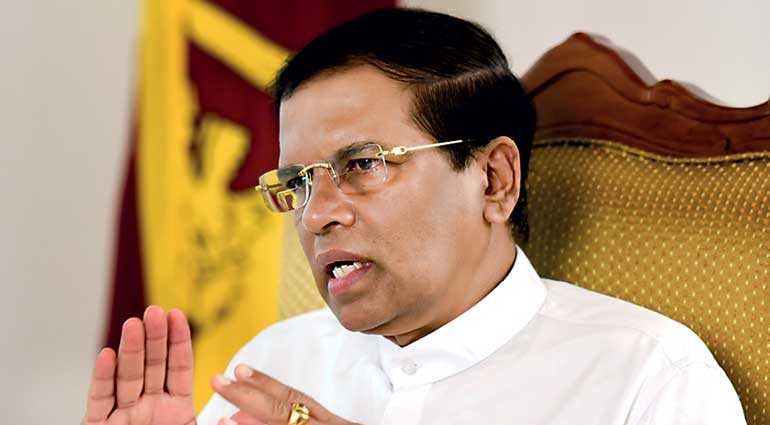 “There are investigations going on, and arrests made, and later bailed, but no cases filed,” he said speaking to newspaper editors and electronic media yesterday. Outlining a number of ongoing investigations, including the disappearance of 11 youth, the President said that although top retired military officials had been detained for months, no charge sheets had been served on the cases.

“I summoned the CID, the Inspector General of Police and the Attorney General and reprimanded them on why they have not served charge sheets for those accused of abducting and murdering the 11 youth. The suspects who were arrested had been detained and now are released on bail except for one.”

The President on Thursday summoned a special Cabinet meeting to discuss the matter, where the case of 11 youths was featured prominently as the CID has obtained a Court order for the arrest of the current Chief of Defence Staff. However, President Sirisena highlighted that no statement had been recorded from CDS Admiral Ravindra Wijegunaratne before the arrest warrant was obtained.

His attempt to garner support from the Cabinet to prevent impending arrest of the country’s senior-most military official was botched by the Cabinet, which deferred the decision until Prime Minister Ranil Wickremesinghe returned to Sri Lanka from a trip in Vietnam.

Clarifying the accusations levelled against Admiral Wijegunaratne, the President said that the officer was accused of aiding a key suspect to leave the country. However he found fault with the CID for attempting to arrest the top military official without first recording a statement.

“The CID and the AG’s Department have been instructed not to make any arrests of any military personnel if no proper charge sheet can be filed; if not, the Government will be accused of a witch-hunt of the war heroes,” the President said.

Sirisena also said that a special unit had begun investigations to look into statements made on a conspiracy to assassinate him by individuals within the Police Department. He also said that an internal investigation had already commenced under the IGP’s direction and the Police Chief and CID were to meet the President to discuss further action to be taken.

Discrediting reports on weakening national security, President Sirisena, who is also Commander-in-Chief of the tri-forces, assured that no compromises had been made in the country’s defence strategy.

“Even nine years after the war, the biggest allocation in the annual budget is for the military,” he insisted, noting that the tri-forces were given training and maintain military readiness.

Dismissing claims that the Government was removing camps from the north ignoring security needs, the President said that only camps set up on temporary measure during the war were being withdrawn.

“After a war, the military has to be restructured to the new situation. We have to think in terms of peace and national reconciliation without compromising on security,” he said, adding that the comments made by a retired officer were based on personal rivalry with serving officials.

“Some officials continue their rivalries even in their retirement, this is something like that,” he quipped.

Sirisena also said that the security forces had received worldwide recognition as a professional and disciplined force as evident by the participation of Sri Lankan troops in United Nations peacekeeping operations worldwide.

However, in a bid to address the issues the United Nations has raised about Sri Lanka regarding the war, Sirisena said he intended to make a special request during his address at the 73rd Session of the United Nations General Assembly on 25 September, followed by a written request to both UN Secretary General Antonio Guterres and the UNHRC’s new Head, Michelle Bachelet.

“I will first submit my request, and then in March I plan to present it as a proposal to the UNHRC during the March 2019 sessions,” he said.

The President declined to divulge the details of the proposal, however said the plan was likely to earn him criticism despite his best intensions.

When asked about the delays in carrying out the recommendations by the UNHC, Sirisena said that it was best to work such delicate and complex matters dealing with post-war situations at a slow pace.

“It is not good to fast-track such issues, the issue we are facing now is that we did not do what needed to be done for reconciliation in the post-war situation. So we need to be patient and work slow to ensure that progress is made without further conflict among communities,” he said.

“Although there is a delay like in the Local Government elections, we will hold the elections soon after we solve the issues with delimitation. The aim is to move away from preferential system to eliminate excess spending and corruption,” he said.