You are here: Home / Business Now / President floats committee on JCT and ECT 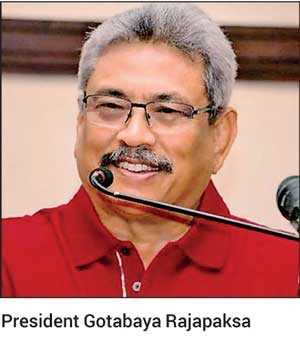 Wading into the issue of the East Container Terminal (ECT), President Gotabaya Rajapaksa yesterday appointed a five-member committee to examine and report on how to develop both the State-run Jaya Container Terminal (JCT) and the new ECT of the Colombo Port.

The committee, according to the President’s Media Division (PMD), has been tasked with examining several issues including the procurement procedure and related concerns with regard to the development of JCT, assessment of the compliance to the Cabinet decision, and the observation of the Minister of Finance connected with the Cabinet Decision dated 26 July 2017, on enhancing the deep berth capacity and modernisation of the Jaya Container Terminal (JCT) of the Sri Lanka Ports Authority (SLPA) and also examine as to why JCT was not developed prior to ordering of required machinery.

The Committee will also evaluate the cost implication of the unsolicited procurement actions and shipment of them prior to the building of the terminal, as well as agreements entered into by the Government of Sri Lanka with other governments with regard to Colombo Port and in particular ECT.

The Financial implications and cost-benefit analysis of ad-hoc decisions taken by SLPA, the relevant line ministry and the Government with regard to decisions linked to JCT and ECT.

In addition the committee will also have to identify the officials who were responsible for these decisions and recommend action against them and recommend the way forward to develop the above mentioned two terminals to get the maximum benefits for Sri Lanka for the development in trade, shipping and investments including Foreign Direct Investment (FDI).

The Committee has been requested to consult relevant line ministries, stakeholders and submit their report within 45 days from Friday.

In May 2019 the former Government entered into a tri-partite Memorandum of Understanding (MoU) with Japan and India to build the ETC. Under that agreement Japan was to provide a loan of $ 500 million and India was to do the construction.

The agreement was signed during the tenure of former Ports Minister Sagala Ratnayaka. However, former Ports Minister Mahinda Samarasinghe, who held the portfolio before Ratnayaka, and former President Maithripala Sirisena had earlier promised the SLPA trade unions that the ECT will be built and operated by the SLPA.

The unions contend that if the ETC is given to a foreign company then the SLPA will not have a deep water terminal capable of berthing large ships and will eventually lose out to the other two privately operated terminals.

Colombo International Container Terminal (CICT) is currently operated by a Chinese company and the South Asia Gateway Terminal is run by conglomerate John Keells Holdings. JCT, which is the oldest of the three terminals currently under operation is not deep enough to compete with the other two terminals.

Shipping experts have long warned that the much delayed ECT was urgently needed to keep the Colombo Port competitive and continue its hub status in South Asia. But efforts to make it operational since 2015 have largely failed to take off.

According to the SLPA, the MoU signed under the former Government states that the SLPA retains 100% ownership of ETC. The Terminal Operations Company (TOC), which will be responsible for all operations within the terminal, will be jointly owned by Sri Lanka, Japan, and India. Sri Lanka will maintain a 51% stake in the company, while Japan and India will hold minority stakes of 34% and 15% respectively.

Development of the ECT was to be financed by Japan through a 40-year soft loan of between $ 500 million-$ 800 million. The loan will be at a 0.1% interest rate with a grace period of 10 years. Other experts had also pushed for the ECT to be developed as a public-private partnership ventures.

Tenders that were called in early 2015 also led to a dead end with all bidders eventually disqualified by the Cabinet Committee on Economic Management (CCEM) presided over by former Prime Minister Ranil Wickremesinghe.