By Yohan Perera and Ajith Siriwardana
Ports and Shipping Minister Mahinda Samarasinghe yesterday told Parliament that President Maithripala Sirisena and the Sri Lanka Freedom Party (SLFP) strongly oppose the move to liberalise the shipping and freight forwarding industries, which was proposed in the Budget 2018. He said Finance and Mass Media Minister Mangala Samaraweera consulted neither him nor the industry stakeholders with respect to the proposed changes to remove the 40 percent limit on foreign parties to owning shipping agencies and freight forwarding companies in Sri Lanka.

Speaking during the committee stage debate on the Budget 2018, minister Samarasinghe said libralisation of the shipping and freight forwarding industries would negatively affect the local players in the industry.

“I am opposing this proposal as a member of the Sri Lanka Freedom Party (SLFP) which is committed to safeguarding local entrepreneurs” Samarasinghe said.

He said President Maithripala Sirisena is also of the opinion that the shipping industry should not be liberalised.

However, Samarasinghe suggested that international players should be allowed only if they are willing to invest substantial amounts of money in the industry. If not, he said, the country would not gain anything from the proposed move.

“However, we are confident that the Finance Minister will look into this and make necessary amendments to the budget proposal” Samarasinghe told Parliament.

However, Samaraweera during a post-budget forum in Colombo said a discussion on budget proposals is possible, but changing the core principles of free enterprise and liberalisation in the budget was “non-negotiable.”

In an earlier interview with the state television, Samarasinghe pledged that he would not sign any gazette, as the subject minister, that will be harmful to the local entrepreneurs in the shipping and freight forwarding industry.

“Lifting of restrictions on the foreign ownership on shipping and freight forwarding agencies, enabling major international shipping lines and logistics operators to base their operations in Sri Lanka will ensure healthy competition, provided an independent ports regulator is introduced,” he said.

Finance and Mass Media Minister Mangala Samaraweera was the chief guest at the meeting, along with the top echelon of the Joint Apparel Association Forum (JAAF); the umbrella organization for the apparel industry.

“We appreciate honourable minister, your firm stand on this and we together with our apex body JAAF, will publicly support this move,” Fernando added.

Opening up the shipping industry is essential if Sri Lanka is to become a hub of the Indian Ocean by year 2025, Deputy Minister of Development Policies and Economic Affairs Dr Harsha de Silva said yesterday. 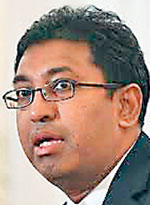 Speaking during the committee stage debate on the budget, the deputy minister said Sri Lanka should be pragmatic in its approach.

He said what the government intends doing is to create a regulatory body for the shipping industry and introduce a competitive fee structure.  “However, everything will be done only after discussing the issue with all stakeholders including the local shipping agencies,” he assured.

Unlike other major ports where cargo handling rates are determined by market conditions, Sri Lanka’s are set by the Central Bank, which decides on agency and transshipment tariffs for local agents.

According to Colombo-based free market think-tank, the current fee structure is complicated, encourages malpractice, and is determined arbitrarily and adversely affects port and logistics industry competitiveness.

This limits transshipment volumes to the essentials – those which flow naturally due to location. Shipping lines have little incentive to