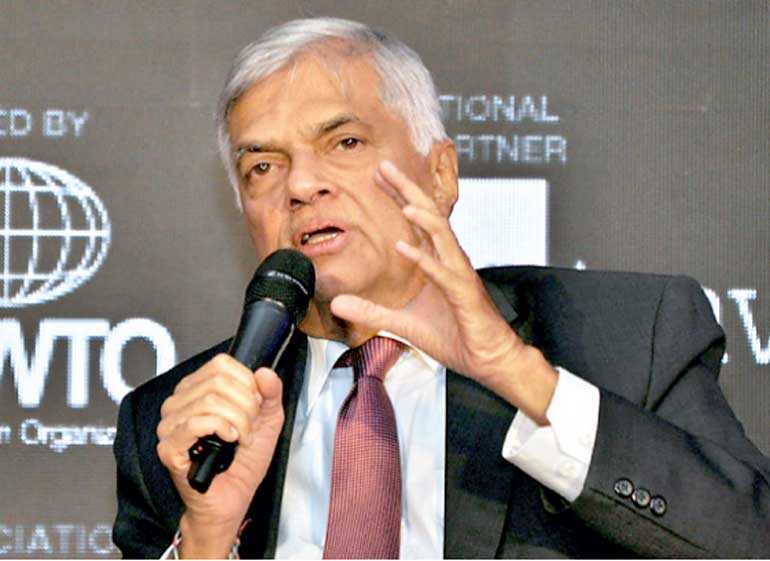 Prime Minister Ranil Wickremesinghe yesterday backed a greater role and say by the private sector in destination marketing and development if the country were to properly harness its tourism potential.

A private-public partnership in global destination marketing, private sector-managed national and avoidance of overregulation of the tourism industry on the part of the Government were some of the measures the Prime Minister said would help a more robust tourism development in Sri Lanka.

These insights were shared by Wickremesinghe during a Question and Answer session with the famous CNN correspondent Richard Quest at the packed Cinnamon’s Future of Tourism Summit yesterday.

Quest was witty triggering laughter and applause yet sharp during his 20-minute engagement with Wickremesinghe.

The CNN correspondent said Lankan tourism industry was frustrated over the delay in the launch of global marketing and PR campaign post-Easter Sunday setback largely due to bureaucracy.

Prime Minister admitted the approval process took too long. “This is why I suggested a public-private partnership venture with greater say by the industry to source money from the promotion fund for the marketing campaign. However the industry as a whole must commit, put in money and take part,” he said adding that a PPP will give greater flexibility in decision-making.

Quest stressed that private sector remains constrained due to Government interference and overregulation. The Premier said the facilitation has improved with single-window investment process as well as development of infrastructure.  However, he admitted that various permits need to be expedited as well as quicker approval for new buildings. He also said that local authorities posed a greater number of day-to-day issues to the tourism sector with various permit requirements and charging of levies as opposed to the centre. “We may have to bring some national laws which lay down what are the rates that can be charged etc.,” he said.

He acknowledged that in the past the Government played a major role in running and developing tourism and historically Government has been seen as responsible. “However, the Government must get out of it and not regulate too much,” Wickremesinghe told the Summit drawing applause from participants.

“We need private management. National carrier must focus on a few routes and allow others to operate,” Wickremesinghe added.

Apparently unconvinced with the response, Quest pressed on saying SriLankan Airlines problems were due to Government interference and meddling which again drew applause from the audience. Wickremesinghe rebutted saying it wasn’t about interference but there was a debt of $ 1 billion and “we all have to pay for it.”

Quest was quick to say at least he doesn’t have to but Premier was equally witty to tell Quest “each time you come here you pay VAT and you are a paying part of it”, eliciting more laughter from the audience.

On a serious note Wickremesinghe reiterated that tourism is one of the important sector of the economy and there must be greater value addition to the tourist’s experience. “We also need more investments by both foreign and local companies,” he added.

Quest described the Easter Sunday attacks as a defining moment for the tourism industry which was booming post-war and asked the Premier what was the lesson, for which the latter said Sri Lanka was facing a new threat and all must unite and cannot disregard information stemming intelligence agencies however difficult it may be.

Quest raised issues of lack of coordination and communication among State actors and intelligence agencies as well as a level of dysfunctionality among reasons for the failure to prevent the Easter Sunday attacks.

“We learned from the Easter Sunday attacks. Post-21 April, a greater focus on ISIS and other extremists as well as those who spread hate speech has been initiated,” Wickremesinghe added.

He also said Parliamentary Select Committee findings as well as those by others probing Easter Sunday attacks will be made public.

The Premier thanked the industry and other stakeholders for rallying and supporting the recovery since Easter Sunday setback. He noted a host of national religious and cultural festivals were concluded without any incidents.

Wickremesinghe assured that tourism won’t be a political football and that post-Easter Sunday, all political parties were supportive to ensure a quicker recovery of tourism. 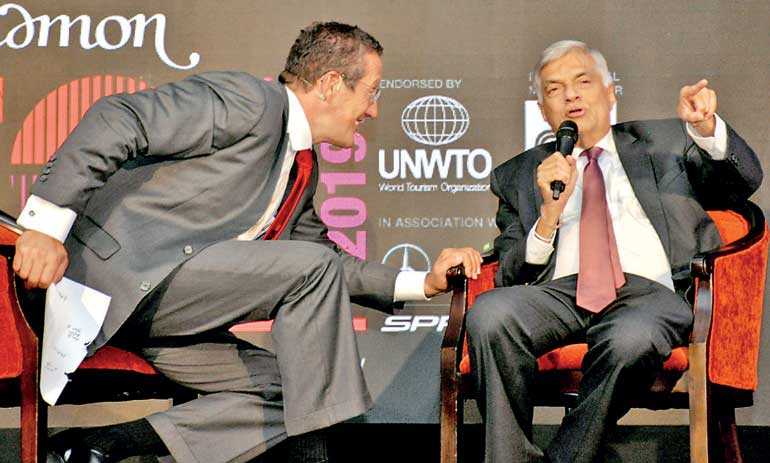 Quest kicked off with what is probably the Frequently Asked Question (FAQ) from Wickremesinghe and politically savvy Lankans – Who will be UNP’s presidential candidate? The PM responded simply with an emphatic “no”, triggering laughter among Summit participants as he said: “Let’s move on.”

The preserving Quest ended the Q&A repeating the same question, “Are you sure you won’t tell me who is your presidential candidate is?” for which an equally witty Wickremesinghe said: “I am a bit frightened because every politician wants the top job and all have gotten frightened and all 225 must be thrown out.”

A participant said certain sections of the Q&A resembled the two characters of the famous old BBC comedy the ‘Two Ronnies’.

Could playing the piano in a hotel be incumbent Prime Minister Ranil Wickremesinghe’s pastime after he retires from politics?

As part of an answer in response to Quest’s question, Premier said as more hotels come “there won’t be enough pianists to play” to create an authentic experience. Quest snapped back asking the PM “do you play the piano?” for which Wickremesinghe replied “I used to”. This answer prompted the witty Quest to suggest: “Well then there is a job after politics for you,” triggering laughter and applause at the Summit.Ã¢â‚¬â€¹