You are here: Home / Business Now / Navy team gets onboard Advanced Offshore Patrol Vessel being built in India 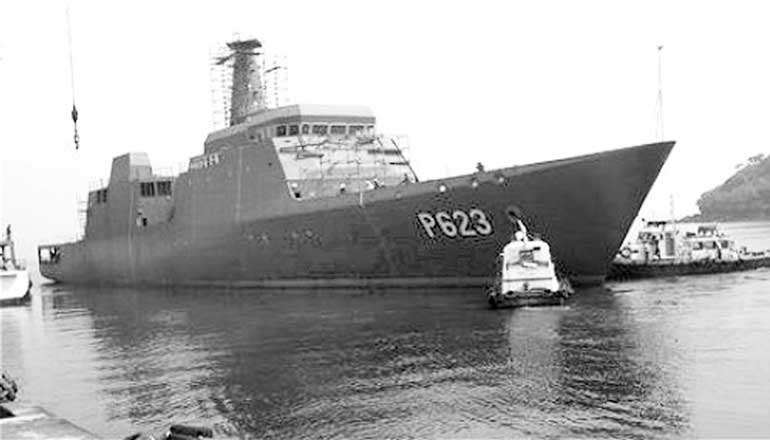 The Indian shipbuilding company, Goa Shipyard is currently at the completion stages of building two 105m Advanced Offshore Patrol Vessels (AOPV) for the mission requirements of the Sri Lanka Navy.

The Sri Lanka Navy crew who are expected to steer one of the AOPVs, got onboard the ship to acclimatise themselves to the state-of-the-art facilities and technologies of the ship.

The new AOPV is intended to conduct patrols, policing, search and rescue, surveillance and pollution control missions in Sri Lankan territorial waters. With its inclusion to the Sri Lanka Navy fleet, it will soon become the Flagship Vessel of the Sri Lanka Navy.

The vessel has an overall length of 105.7m and width of 13.6m. Apart from the displacement capacity of 2,350 tonnes the vessel also features a helipad for convenient helicopter landing. The AOPV offers spacious accommodation for the comfort of 18 officers and 100 sailors. Befittingly the vessel has an endurance of 4,500 nautical miles in terms of carrying out its surveillance operations.

The commencement of the production of these AOPVs officially initiated in May 2014 and the unslipping of the vessel was executed in June 2016. The Sri Lanka Navy is expected to take delivery of the first vessel in June 2017, followed by the second a year later. The second 105M AOPV was ceremonially unslipped at Goa Shipyard on 15 December 2016.

‘Unslipping’ is an important milestone in construction of ship, where the vessel is taken through slipway from land to the water and tested in water for the first time.