You are here: Home / Business Now / Mixed performance in external sector in Aug.

However, the financial account of the Balance of Payments (BOP) was supported by the receipt of the second tranche of the foreign currency term financing facility to the Government along with continued foreign inflows to the Colombo Stock Exchange (CSE) and the government securities market in August 2017.

Surpassing the $ 1 billion mark for the second consecutive month, earnings from exports increased in August 2017, indicating the positive impact of the restoration of the GSP+ facility. Accordingly, earnings from exports increased by 15.5% (year-on-year) to $ 1,001 million in August 2017 mainly due to an increase in industrial exports followed by agricultural exports.

Meanwhile, export earnings from gems, diamonds and jewellery (23.6%), machinery and mechanical appliances (14.0%), and rubber products (4.1%) increased during the month compared to the corresponding month of the previous year. However, export earnings from base metals and articles, printing industry products and transport equipment declined in August 2017. 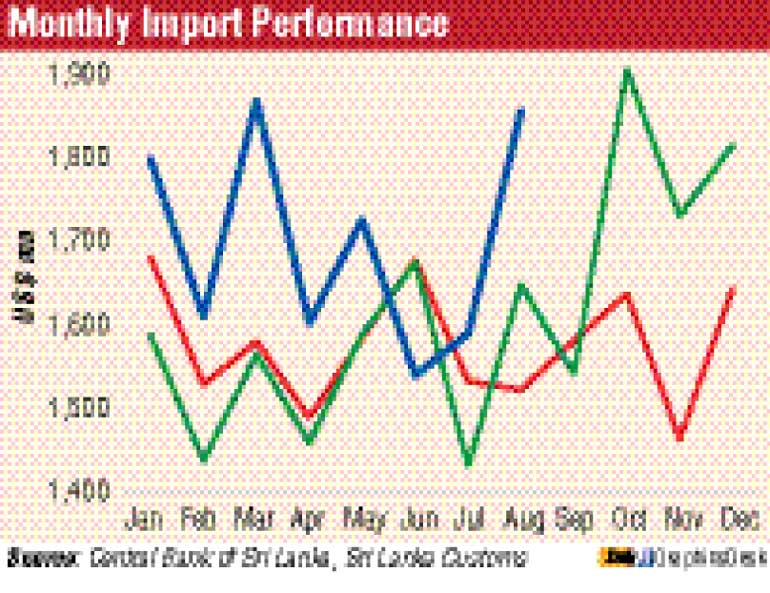 On a cumulative basis, earnings from exports grew by 7.6% year-on-year to $ 7,413 million during the first eight months of 2017 mainly due to increased earnings received from exports of tea, petroleum products, transport equipment, spices and seafood.

In contrast, on a cumulative basis, export earnings from textiles and garments, gems, diamonds and jewellery and leather, travel goods and footwear declined during the period under consideration.

The US, the UK, India, Germany and Italy were the leading markets for merchandise exports of Sri Lanka during the first eight months of 2017, accounting for about 50% of total exports.

This was largely driven by the significant increase in refined petroleum imports by 110.9% to $ 233 million. In addition, reflecting the impact of high crude oil prices in the international market, import expenditure on crude oil increased by 12.2% despite a reduction in volume.

Meanwhile, higher imports of chemical products, wheat and maize and food preparations contributed largely towards the increase in intermediate goods imports during the month. However, import expenditure on mineral products and fertiliser declined by 54.8% and 30.4%, respectively in August 2017 compared to the corresponding month of the previous year.

Continuing the year-on-year increasing trend, expenditure on rice imports increased in August 2017 following the measures taken to fulfil the shortage of rice in the domestic market. Meanwhile, import expenditure on vegetables, dairy products and fruits increased during the month.

Import expenditure on building materials increased by 6.8% year-on-year during this period owing to higher imports of iron and steel, articles of iron and steel, and ceramic products. However, import expenditure on transport equipment decreased by 10.0% year-on-year in August 2017, mainly due to lower imports of road vehicles such as auto trishaws and cabs for commercial purposes.

Reflecting these developments, on a cumulative basis, import expenditure increased by 9.6% year-on-year to $ 13,599 million during the first eight months of 2017 largely due to higher imports of fuel, gold and rice. However, import expenditure on machinery and equipment, personal vehicles and fertiliser declined during this period.

With regard to the origin of imports, India, China, the UAE, Singapore and Japan were the main import origins during the first eight months of 2017 accounting for about 59% of total imports.

AFP: Sri Lankan workers in the Middle East sent back fewer dollars in August, the sharpest monthly drop yet owing to adverse economic and geopolitical conditions in the region, its central bank said Wednesday.

About two million Sri Lankans or 10% of the population work overseas, mostly in the Middle East and in construction and hospitality or as household maids.

Money they send back to families is the main source of the country’s foreign exchange and is used to finance nearly 80% of its trade deficit.

Remittances in the first eight months of the year also fell by 6.3% to $4.5 billion, the bank said, the biggest drop ever seen and significantly more than 2015’s dip of 0.53%.

Central Bank Governor Indrajit Coomaraswamy said recently the decline in remittances was disturbing, while pinning his hopes on growth in the country’s small export sector.

Sri Lanka has been an exporter of skilled and unskilled labour for decades.

The fall in remittances is a double blow for the country, which is simultaneously having to shell out more for foreign workers.

That demand comes from a labour shortage at home in sectors such as construction and manufacturing, which have picked up since the decades-long Tamil separatist war ended in May 2009.