The ‘Designer Budget’ presented by the new Finance and Mass Media Minister Mangala Samaraweera is said to have a number of blessings in disguise for which the country’s leading business chamber urged its community to thoroughly analyse the proposal so that no opportunity is missed. 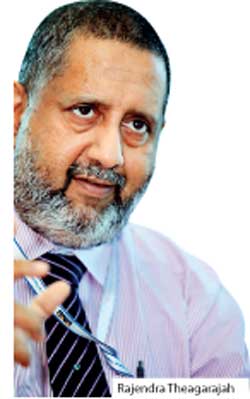 Implying that existing and new businesses can reap a plethora of benefits provided they know which areas to tap into, Ceylon Chamber of Commerce Chairman Rajendra Theagarajah said: “The opportunity for everyone now is to study the various schemes made available in the 2018 budget. In addition to the Central Bank Schemes, made available are low interest schemes which will help in boosting businesses.”

The CCC Chairman made his observations at the KMPG Post Budget Forum held in Colombo yesterday when referring to the number of proposals that aims at uplifting nearly all segments of the business community. The efforts taken to address existing bottlenecks was also acknowledged and commended.

Theagarajah implied that this time round the proposals were more of a “package”, instead of shocks that were witnessed in the previous two budgets.

“It is not just giving a shock to the system but creating a package. It took into stringent consideration the SME sector, not forgetting the youth and female entrepreneurs, and also encourages the differently abled community.

“It (budget proposals) recognizes that SME is key and the need for inclusive growth,” he opined.
From the chamber point of view, the expectation of having consistency in policies, communication and efforts, were delivered as expected, he said.

Furthermore, it was also highlighted that the proposals were very much in line in fulfilling the agenda laid out by Prime Minister Ranil Wickremesinghe in the Vision 2025 that was launched this year. The previous two budgets received harsh criticism from the business community for having no correlation with the ambitious goals set by the unity government.

ector continuing to face serious challenges in employing graduates with the right skill set and attitude, the chamber head urged the government to use the allocations made for education to be more “outcome” based.

“While welcoming the focus on education, the only urge is for policy makers to use the budget on a more outcome based focus so the type of graduates can match the needs of the country,” he suggested.