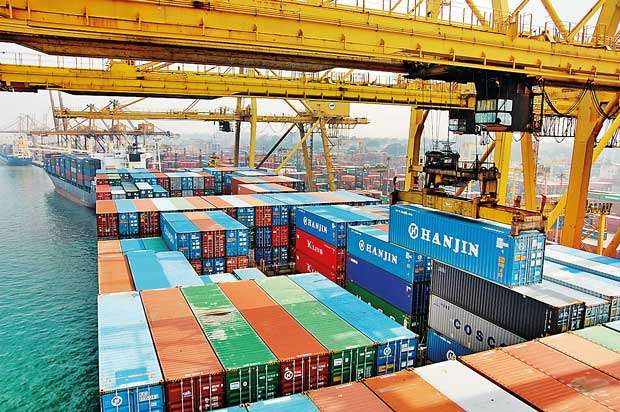 By Nishel Fernando
Sri Lanka’s merchandise exports grew moderately in the first half of the year, at 5.3 percent year-on-year (YoY) to reach US $ 5.63 billion, compared to US $ 5.34 billion recorded for the same period, last year, the provisional data from the Export Development Board showed.

The overall export earnings— both merchandise and service exports— grew by 7.24 percent YoY to US $ 7.7 billion, from US $ 7.18 recorded in the first half of last year, achieving 44 percent of Sri Lanka’s export target set for this year.

The service export earnings grew faster than merchandise exports at a rate of 16.6 percent YoY in the period to US $ 2.1 billion.

The Sri Lanka Tea Board expects the tea exports to rebound in the second half of 2018, as the May-June tea harvest is expected to come into the market in September.

The export revenue from coconut and coconut-based products increased by a marginal 0.78 percent YoY to US $ 287.91 million in the first half, mainly driven by a 17.43 percent YoY growth in the coconut shell products.

With regards to industrial exports, the export income from the electrical and electronic products expanded by 17.61 percent YoY to US $ 205.13 million during the first half, while the exports of petroleum products grew by 50.45 percent to US $ 166.67 million.

The fish and fisheries exports grew 13.51 percent to US $ 141.38 million as the country continued to capitalise on the GSP Plus concession from the European Union (EU).

The export earnings from diamonds, gems and jewellery declined by 4.4 percent to US $ 133.32 million as the gem and jewellery exports had become less competitive in export markets due to the 15 percent gold import duty slapped in April.

The export of base metal products increased by 49.85 percent to US $ 77.04 million, while earnings from non-metallic mineral products grew by 7.71 percent YoY to US $ 53.53 million, despite a 8.4 percent YoY decline in ceramic and porcelain exports.

The EU remained the largest export market for Sri Lanka during the first half of the year, accounting for 30.2 percent and exports grew by 10.3 percent YoY to US $ 1.7 billion, despite the 1.2 percent YoY decline of exports to the United Kingdom.