You are here: Home / Business Now / Mangala responds to MR, calls him divisive

In a strongly-worded response to former President Mahinda Rajapaksa’s recent statement on legal reforms, Foreign Affairs Minister Mangala Samaraweera accused the former head of state of attempting “to deliberately cause division in Sri Lankan society by misleading the public, especially after years of conflict in which all communities have suffered.” 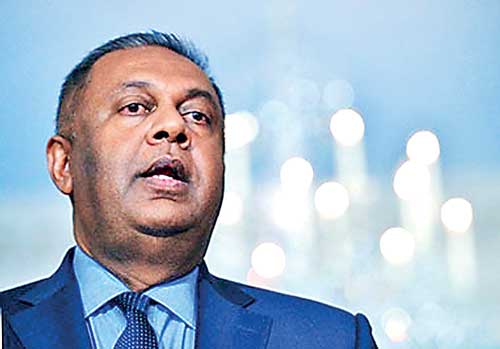 Speaking of the steps being taken by the current Government to actively engage all communities in the country to work towards reconciliation, Samaraweera stated that his Government had moved away from the former regime’s foreign policy “to foster trade and prosperity for all rather than antagonising our existing and potential partners.”

Defending the decision to cosponsor a resolution at the UN Human Rights Council in 2015 and to cosponsor an extension of the timeline of the same this year, which drew heavy criticism from the former President, Samaraweera claimed the move was made to guarantee the fundamental rights of all Sri Lankan citizens.

He stated that it would demonstrate to the world that as an independent, sovereign and responsible nation, the country was fully able to pursue accountability nationally in cooperation with the international community to restore credibility to the country’s judicial processes.

“We believe that we will overcome a painful past by examining it, not by hiding it. We are convinced that we need to put a stop to the cycles of recurring violence that have hitherto hindered our progress as a proud, united country and a united people. We know that truth, reparation and justice are essential and further that international jurisdiction over serious crimes only applies when national jurisdiction fails,” the statement said.

Emphasising that transitional justice mechanisms would not isolate any one community or the armed forces, Samaraweera stated that the issue of foreign judges was a mere exaggeration on his part and he did this on purpose to mislead the public. The statement also draws attention to the fact that multiple transitional justice processes were initiated and international prosecutors were engaged under the Rajapaksa Government as well.

Responding to Rajapaksa’s criticism of the six subcommittee reports on the Steering Committee of the Constituent Assembly, Samaraweera said that the many issues indicated in the reports “still remain to be discussed and resolved.”

“The people of Sri Lanka will ultimately judge the final proposals on their merits. They have that right guaranteed to them in the Constitution, which states that ‘In the Republic of Sri Lanka sovereignty is in the People and is inalienable’. Our pledge is to explain all proposals with clarity and honesty without distorting facts or perceptions with divisive rhetoric as Mr. Mahinda Rajapaksa attempts to do,” the statement claims.

Hailing the Consultation Task Force on Reconciliation Mechanisms (CTF) process as a success, Samaraweera claims that it represents a departure from reconciliation mechanisms under Rajapaksa’s administration that lacked comprehensive public consultation. Saying that the process displays that the views of all citizens from all communities and all geographic locations have been listened to, and that these views merit reflection and consideration, Samaraweera accused the former President of picking and choosing recommendations that may appear controversial to some to drive fear and create divisions within the public.

He added that the process followed to regain the GSP+ concession was similar to any entity considering a partnership. The EU requires countries to fulfil certain requirements pertaining to the fundamental rights of their respective citizens.

Questioning Rajapaksa’s stance, Samaraweera said: “How can anyone in his or her right mind deny the citizens of our country the right to enjoy the highest standards of fundamental rights and freedoms as recognised by the conventions to which we are a party to? Don’t our citizens have a right to enjoy the rights that other human beings in the world enjoy?” Samaraweera asked.

He also defended the move to replace the Prevention of Terrorism Act (PTA) with a new counterterrorism law, saying the PTA was “an anachronistic piece of legislation from a conflict-plagued past”.

“The new act will ensure that Sri Lanka’s security forces and intelligence officials can protect the State and the public while respecting the physical and mental integrity of each citizen.

“To suggest that replacing it with a modern law is unpatriotic is baseless,” Samaraweera asserted.

“If the former President wishes to imply that stopping the practice of torture is treasonous, we respectfully disagree. Torture has no place in modern, democratic Sri Lanka.”