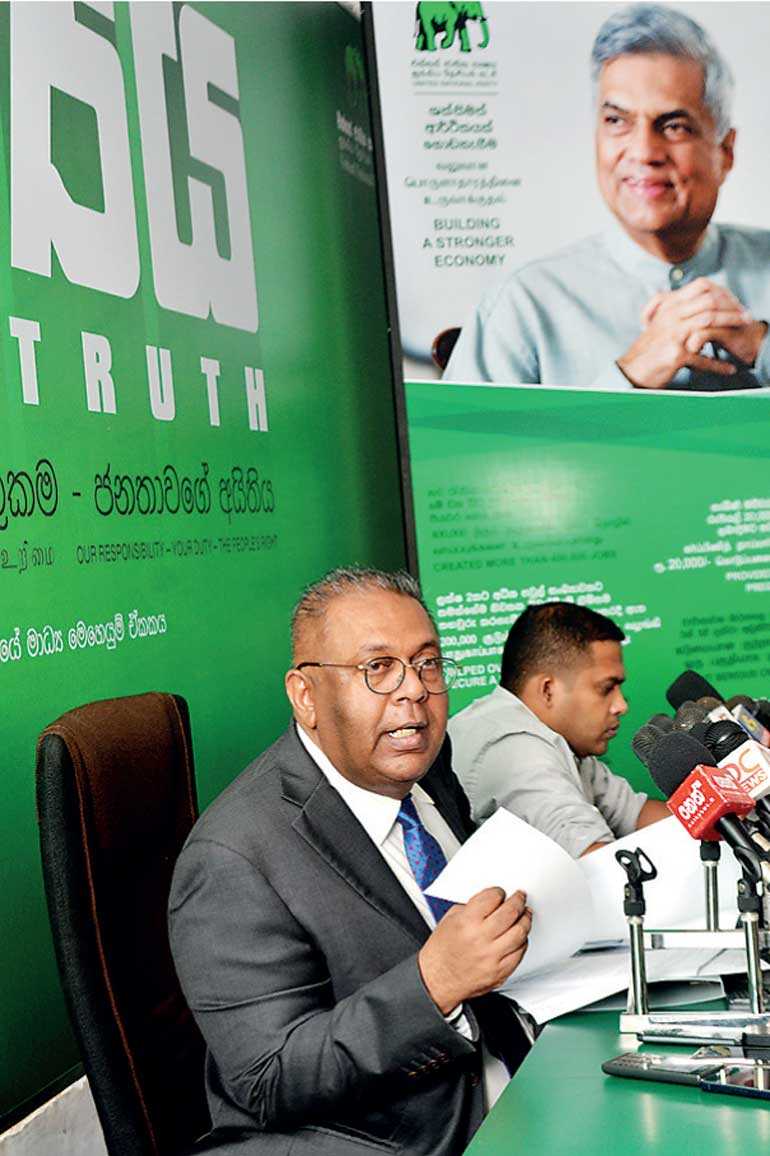 Rebuking Opposition claims, the United National Party (UNP) yesterday said the economy was not facing a crisis but the Government was enacting sustainable policies as opposed to dangerously populist measures.

“We assure that the economy is not near any turmoil, and under no circumstances will the Government let the economy go in that direction,” Finance Minister Mangala Samaraweera told journalists at a press conference held at the UNP headquarters Sirikotha yesterday.

Dismissing all allegations of distress on the economic front, he stated that the Government had not taken shortcuts towards “populist” economic interventions but had opted to take sustainable economic policies that lead to lasting growth.

The weakening of the Sri Lankan currency did not indicate economic turmoil, he explained, adding that the perception of development had become somewhat unclear, with many economic osthars of the past regime constantly ranting about the rupee depreciation.

“Many countries in the world are experiencing depreciation with their currencies against the US dollar due to policies adopted by the Fed. Amidst this regional currency countries in turmoil like India, Pakistan, Indonesia, the Philippines, Australia and Russia are all facing this issue, but I can guarantee that Sri Lanka faced it in the most resilient manner,” he added.

Reiterating that the Government was determined not to use foreign reserves to defend the currency depreciation, Samaraweera said that only $ 250 million was spent thus far, as against the $ 4 billion spent by the former regime in 2012 to shield the rupee artificially and yet it depreciated by 14%.

Noting that the Government inherited the consequences of the myopic policies of the past administration, he said that they chose not to tread the same path and laid a strong foundation for an export-led economy.

“It was virtually a fiscal time bomb we inherited from the crony capitalist system of Mahinda Rajapaksa. This year we have to pay Rs. 1.9 trillion, the highest debt repayment in the history of Sri Lanka and 83% of this was due to debts obtained by the Rajapaksa regime. Next year and the year after we have to pay over Rs. 4 trillion. No one is talking about this and misleading the economy,” he claimed.

Considering the continual pressure on the BOP from increased imports, he said the Government had implemented further measures to restrict the importation of vehicles and certain non-essential consumer goods. During the first 10 months the Minister pointed out that over 14 million LCs were opened to import vehicles.

The Minister assured that a set of well-thought-out measures were being implemented to provide a sustainable, long-term solution to the development needs of Sri Lanka, from a protected domestic market-driven economy to a more outward-oriented economy focused on exports, entrepreneurship, FDI and private enterprises.

“We are going in the right direction, towards an export-oriented economy. Despite all these obstacles, the Government has not stopped development projects. The benefits of the reforms may not fully materialise immediately, but with the combined efforts of all stakeholders we have the opportunity to collectively build a strong, sustainable and equitable economy and society,” Samaraweera declared.

Despite all these challenges, the Minster was confident that the economy would grow over 4% by the end of the year.

According to him, during the first four months tax collection grew by 12.3%, with domestic consumption taxes growing by 9.1% and over 100,000 new tax files being opened. However, he insisted that Government revenue was highly dependent on the 82% indirect taxes as opposed to the 18% direct taxes they collect.

He said the clear priority for the Government was to accelerate Enterprise Sri Lanka and Gamperaliya, which could have a transformational impact on both the rural and urban economies.

“Amidst all these economic challenges we face internally and externally, we have not forgotten rural development and the real entrepreneurs of this country. Under the Gamperaliya program 33,875 projects are ongoing islandwide, where the Government has allocated Rs. 20 billion for the past four months. No Government has spent such funds to uplift the rural economy in this country. We believe in giving to those who need assistance, not to cronies of the family,” he added.

As of 1 October, the Minister said that they had disbursed Rs. 5.4 billion for 26,978 projects under the Enterprise Sri Lanka project, which would help generate a true entrepreneurship culture in the country that leads to inclusive economic development.

“I do not believe that any of these projects would have been possible if the economy was in a dire situation,” he stressed.

The Minister asserted that this negative perception created by the Opposition painted a bleak picture for potential investors looking at Sri Lanka, noting that they were unaware of the reality of the situation.

“The foreign investors think there is political uncertainty in the country when they read the news but they do not know that these are a bunch of people who are desperately daydreaming of coming back to power,” he added.

The Minister said that the UNP would forge ahead toward the next presidential election despite all obstacles.

The Appropriation Bill to provide for the services of the 2019 financial year was presented yesterday in Parliament.

Finance and Mass Media Minister Mangala Samaraweera moved the motion seeking House approval to raise and spend Rs. 4.376 trillion in 2019 to meet capital as well as recurrent expenses of the Government, setting the borrowing limit at Rs.1.944 trillion. Compared to the 2018 Appropriation Bill, it is an increase of Rs. 394 billion.

However, with the motion moved, Chief Opposition Whip, JVP leader Anura Dissanayake, challenged the technicalities of the Appropriation Bill 2019, highlighting that the Government had failed to maintain the 30-day mandatory vacuum before presenting the Budget Speech, which is scheduled for 5 November.

The Appropriation Bill 2019, gazetted on 21 September 2018, seeks passage to authorise the raising of loans within or outside Sri Lanka for the purpose of such service; to make financial provision in respect of certain activities of the Government during that financial year; to enable the payment by way of advances out of the Consolidated Fund or any other fund or moneys, of or at the disposal of the Government, of moneys required during that financial year for expenditure on such activities; to provide for the refund of such moneys to the Consolidated Fund and to make provision for matters connected therewith.

The debate on the Second Reading of the Budget will commence following the Minister’s speech, which is scheduled for 5 November and will continue for five days followed by the Committee Stage process. The third and final Reading Division of Budget 2018 will be taken up during the first week of December.