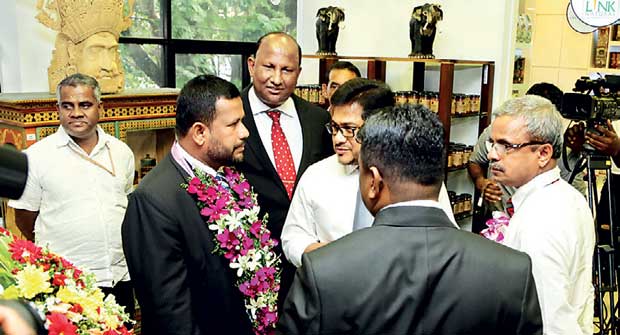 Addressing the launch of Sri Lankan Big Brands at Laksala last week, Minister Bathiudeen said the Laksala, with 40,000 local arts and crafts product lines, has also returned to profits in 2016 after continued losses for four years.

The Minister said the Laksala is becoming a well-known Sri Lankan brand locally, and globally for highlighting local arts crafts and handicrafts. Laksala has become an important stop for tourists visiting Sri Lanka as well.

According to reports, Sri Lanka’s tourism industry employs around 345,000 people. The Travel and Tourism Competitiveness Report of 2017 by the World Economic Forum shows that Sri Lanka is ranked at 64th among 136 countries. Sri Lanka is above Romania, Vietnam and the Philippines. This ranking also gives a score of 3.8 to Sri Lanka out of a total of 7.

Minister Bathiudeen said the global tourism website Trip Advisor gives a four-star rating to Laksala and one reason Laksala is becoming popular is the big basket of products it has.

Laksala had 7,400 “highly active” product lines that are of high sales and in 2016-2017 Laksala has added 600 more new products increasing the number of highly active products to 8000 and the total products to nearly 40,000.

The Minister said the Laksala was able to increase the total product lines as a result of getting more and more new suppliers.

“An important activity of Laksala is providing essential market linkages to Sri Lanka’s traditional craftsmen. I am pleased to say that Laksala’s registered supplier total that was at 6000 a few years ago has increased to 8760 this year,” the Minister said.

Laksala also has shown better financial performance. Laksala had a loss of Rs 21 million in 2015 but it returned to profits last year showing a profit of Rs four million.

Minister Bathiudeen thanked all the local big brands that are partnering with Laksala today for their interest towards Laksala to enhance their image and sales.

According to Laksala performance records, total sales last year was Rs 788 million and in the first six months of 2017 another Rs 381 million sales were made. Laksala also continued to reduce its capital loans paying back Rs 60 million in capital loans in 2016-2017.

“This is to showcase them to local and foreign customers visiting its stores so that more of them are attracted to its showrooms through the image of the selected Sri Lankan Big brands. This will also help to get tourists’ focus on the work of our suppliers and craftsmen,” Nawaz added.