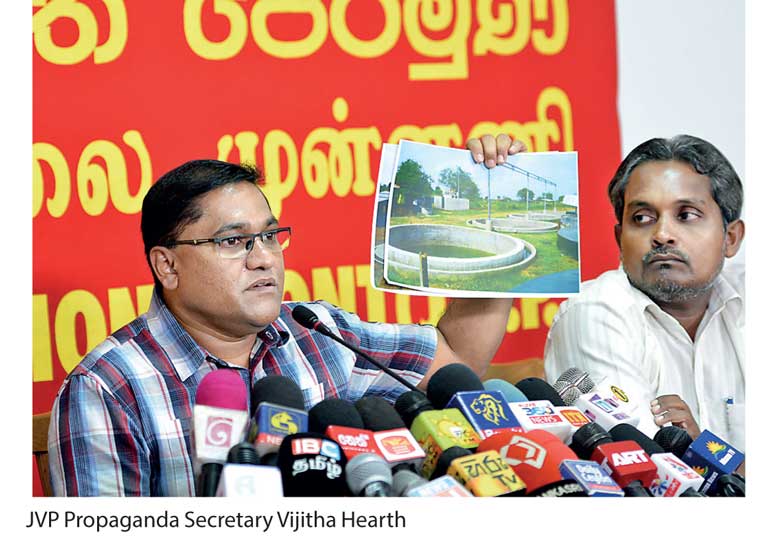 At a news conference held by the JVP, the need to estimate the losses and immediately compensate those affected in proportion to the losses they suffered was also stressed.

JVP Propaganda Secretary Vijitha Herath stated that the garbage problem was a national issue, though no Government in the past had treated it as such. The JVP noted that while the Colombo Municipal Council began dumping waste in Meethotamulla in 2008 under the previous Government, making it the massive dump yard that it is today, the present Government also did not take any action to address the concerns of the residents.

“This problem could have been solved and put under control but the Kollonnawa Municipal Council, the Western Provincial Council and the Central Government did not treat this problem as a burning issue of the people in the country,” Herath stated.

He further alleged that the main problem here was a garbage mafia. “There is a group of politicians and officers who make a profit out of this garbage. That’s why the problem has become so complex.”

Herath claimed that members of local and provincial councils and the Government are connected to this. Herath further stated that the political tug of war between the Western Provincial Council and the Megapolis and Western Development Ministry offered proof of this mafia, adding that it was the responsibility of the Government to take stern action. “The Government can defeat this mafia if it takes direct action. But no Government has made this direct decision. They are only passing the ball and blaming each other. This shows the might of this mafia.”

The JVP also called for the Government to provide long-term and sustainable policy level solutions to the issue based on scientific solutions such as separation of waste and waste reduction, reuse and recycling without merely moving the dump site to other urban areas such as Ekela and Karadiyana.

In line with this, the need for a strong educational program targeting children and adults alike, along with mechanisms at the local, provincial and central government level were called for. It was strongly suggested that an area with a low population density be selected to dispose waste and to immediately opt for a waste recycling program.

JVP Western Provincial Councillor Sunil Watagala, who was also present at the news conference, stated that the garbage was dumped at Meethotamulla without any prior assessment of the environment. He added that this was no natural disaster but murder caused due to neglect. It was also stated that both the previous and present governments should take responsibility for the disaster.

Former Urban Councillor Dhammika Wijeyamuni, who stood up against the Colombo Municipal Council’s 2008 decision to dump garbage in Meethotamulla, was also present and addressed the media.