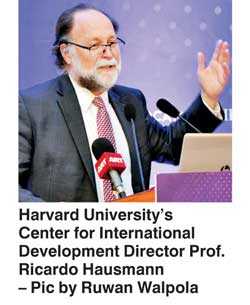 Prof. Ricardo Hausmann is Director of Harvard’s Center for International Development and Professor of the Practice of Economic Development at the Kennedy School of Government. Delivering a lecture titled “Accessing knowhow for development” organised by think tank Advocata in Colombo, Prof. Hausmann, himself a Venezuelan migrant to the US, laid out a compelling case on how well-managed immigration and emigration could benefit the economic fortunes of countries.

“It is the cheapest idea around. The lowest hanging fruit for the developing world to access. The fastest way to increase productivity, attract investment and make Sri Lanka a much stronger country,” he told a packed audience at the Lakshman Kadirgamar Institute.

“With the talent you have, you have the country you have. But with the talent you have, you cannot have the country you want to have. For that, you have to look for talent, and if other people come to live in Sri Lanka they are not coming to steal other people’s jobs. They are definitely here to create more jobs, and to help locals make more money. Because they decide to come to Sri Lanka, that should make you feel good about your country. It means that there are other people in the world who think you are cool. That this is a great place to live,” he said.

Prof. Hausmann conceded that it was understandable that local professionals would feel threatened by a liberalised labour market, but he emphasised that in country after country, there are examples to show that immigration creates jobs and increases salaries rather than the opposite. He insisted that allowing free movement of labour makes economies more competitive and industries more profitable, and noted that the idea of immigration taking away jobs “does not make economic sense.”

Taking Sri Lanka’s IT industry as an example, he pointed out how it could gain from linking with the more vibrant Indian market, and would not be impacted by a significant inflow of Indian IT professionals because they are better paid than locals. He pointed out that arguments against the Singapore Free Trade Agreement (FTA) by doctors were also invalid for the same reason.

During the hour-long lecture, which was followed by a question and answer session, Prof. Hausmann explained that an industry such as agriculture can be both low in productivity and highly productive, in different parts of the world, at the same time, because of the larger linkages of knowhow that some countries have as opposed to others. He pointed out that traditional farmers actually have greater knowledge than their industrialised counterparts, but a farmer in a developed country would have access to the latest equipment, high-yield seeds, best fertiliser and stronger market links that would give them higher profits.

Comparing Sri Lanka with Singapore, Malaysia, Bangladesh, Thailand and Vietnam, Prof. Hausmann noted that unlike other countries, Sri Lanka had failed to add new products to its export basket, and therefore was constrained by exports that could be easily duplicated elsewhere. He also pointed out that this is linked to low FDI and other issues in Sri Lanka’s economy, for which immigration could be a feasible solution.

“Economies grow by adding new products and services to their production portfolio, and not by producing more of the same kinds of products. The key to such diversification is access to know-how, but know-how often has to come from abroad. This is because it is often easier to move brains to new countries than to move new know-how into brains. In the experience of Singapore, India, Vietnam and most other dynamic economies, three channels of know-how transfer stand out: FDI, immigration and diaspora networks,” he told the gathering.

Drawing from data, Prof. Hausmann showed how in other countries, foreigners are a significant segment of the population. In the US, one in seven individuals is estimated to be a foreigner, while in Singapore one in every two individuals is a foreigner. In contrast, in Sri Lanka only one in 535 people is a foreigner. Large industries in the US, such as car manufacturing in Detroit and Silicon Valley, were begun by immigrants. Almost half of Fortune 500 companies were formed by immigrants or their children, while Bangladesh’s very successful garment industry was founded by a Korean company, whose employees later went onto start their own businesses. Bangalore and Hyderabad are two cities that thrive because of vibrant immigration links, and because of Indians who have returned to become IT entrepreneurs.

Prof. Hausmann also went on to say that Sri Lanka has its own set of companies, such as Loadstar, that was begun with international support and expertise. He praised local apparel companies, such as MAS, that possessed what he described as the “best factories in the world.”

All these positive traits could be promoted through allowing a robust immigration and emigration system, he added: “So when we did a comparison of Sri Lanka’s immigration policy with Singapore, Malaysia, Hong Kong, Panama, Saudi Arabia, Thailand and Vietnam, the most successful ones have a very successful immigration policy, and it shows in the type of rules that they have. For example, they have a variety of visa rules for unskilled categories, semi-skilled, trainees, managers, and professionals. Typically, Sri Lanka allows high-skilled people in, but they don’t allow their dependents to work. If the BOI gives a work permit to one person, then their spouse is not allowed to work. Usually professional people marry other professional people, so if you are married and you cannot bring your wife, or she cannot work, that becomes an issue.

“The idea I would suggest for Sri Lanka is to simplify procedures for immigration, create more visa categories, so that you become a more attractive place. Provide a path to residency, which is the case in most countries, and allow them to become citizens. In fact now, a Sri Lankan who migrates out of Sri Lanka and gives up his citizenship, is not allowed to come and stay in Sri Lanka. That is weird. These are inefficiencies of the system that would be better fixed.”

However, Prof. Hausmann acknowledged that immigration policy alone would not fix all of Sri Lanka’s economic problems, and advocated that the Government should continue its other policies, such as market reforms, fiscal consolidation and infrastructure development.  “Anything that is worth doing is worth doing better. So there are many other things that need to be improved. I think Sri Lanka needs to go from authorising or handholding investors, to actually going out and seeking investors, and making the case for investors as to why they should be here. We have been working with the BOI and the EDB in trying to get them to move in that direction. I drove five hours to Kandy and five hours back from Kandy, and I don’t think I’ll be driving to Kandy again. Obviously infrastructure is something that needs work, but that is expensive and you need to have the fiscal space to do that.”

He noted that anti-immigration sentiment was present in all countries, but that it could be mitigated by strong, diversified and transparent immigration laws. He opined that even the UK after Brexit had worked to spruce up its visa laws, but stopped short of making any changes that would hit its economic strength.

Officers of Department of Immigration and Emigration have announced a silent protest today at the BIA and from midnight to carry out a work-to-rule campaign.

The move is to win demands for better recognition of their service.

Immigration and Emigration Controller General M. N. Ranasinghe yesterday said that Cabinet had given approval for the formulation of a new visa law, which would allow for new categories to be added to the visa process and also address concerns of people movement.

Responding to a question during Prof. Hausmann’s talk, Ranasinghe noted that the Cabinet paper had been approved recently, and acknowledged that it was essential to update Sri Lanka’s immigration laws to deal with current challenges.

“Right now, we are working according to a law that was introduced in 1948. So there is a grave need to update the laws and provide a new framework for dealing with immigration challenges,” he said.

The new approvals had also given the Controller General and other top officials of the Immigration and Emigration Department greater autonomy in decision making, he added. Ranasinghe noted that the Department was focusing on establishing comprehensive polices and systems for different visa categories, including working visas, as none existed at the present time giving clear requirements.

The International Trade and Development Strategies Ministry would also present a Cabinet paper in the next two weeks, to allow local professional organisations to coordinate on cross-checking qualifications of their foreign counterparts that apply for work visas. These measures were taken after consultations with different local professional associations and organisations, the official said.