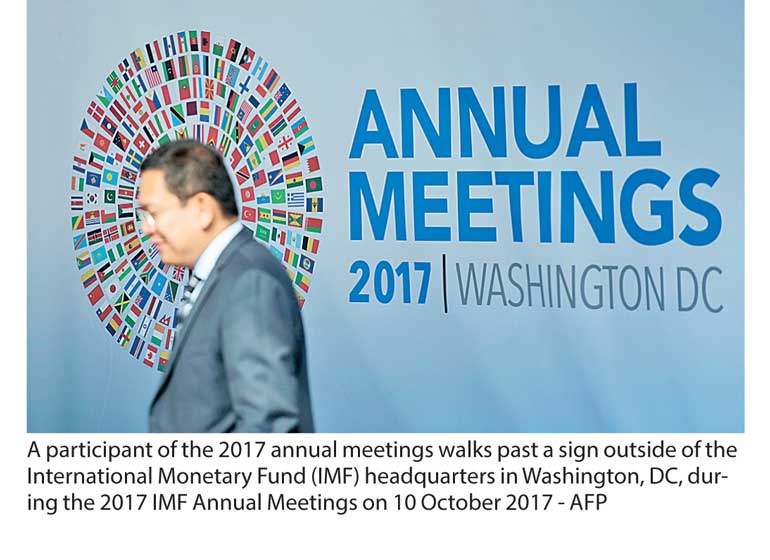 By Uditha Jayasinghe in Washington

Building on a global upswing, the International Monetary Fund (IMF) yesterday gave Sri Lanka an optimistic growth projection of 4.7% in 2017 and 4.8% in 2018 despite the Central Bank adjusting growth to be below 4.5% this year on prolonged natural disasters and lagging reforms. The IMF’s flagship World Economic Outlook launched in Washington on Tuesday upgraded its global growth projections to 3.6% for this year and 3.7% for next—in both cases 0.1% above its previous forecasts, and well above 2016’s global growth rate of 3.2%, which was the lowest since the global financial crisis.

Sri Lanka is also expected to have higher than average inflation. In September inflation hit 7.1% and the Central Bank projected the numbers to ease to about 5% by the year’s end.

Sri Lanka’s consumer prices are tagged at 5.1% for 2017 and 5% in 2018. Sri Lanka is also projected to show a negative current account balance of 2.5% that will ease to 2.3% in 2018, which the Central Bank announced earlier this month is mostly predicated on increased imports such as fuel and food triggered by the drought.

The IMF acknowledged the unevenness of global growth recovery noting that it is included both within and across countries. The world is at a point where policymakers need to make progressive, long-term policies that focus on structural reforms and strong fiscal policy, the report said. Commodity and fuel exporters will continue to struggle impacting countries in sub-Saharan Africa and pockets of Asia.

“The current global acceleration is also notable because it is broad-based—more so than at any time since the start of this decade. This breadth offers a global environment of opportunity for ambitious policies that will support growth and raise economic resilience in the future. Policymakers should seize the moment: the recovery is still incomplete in important respects, and the window for action the current cyclical upswing offers will not be open forever,” IMF Research Director Maurice Obstfeld told reporters.

The World Economic Outlook also highlighted emerging challenges such as persistently low inflation despite low unemployment and stagnation of per capita incomes. It projects that 43 emerging market and developing economies will grow even less in per capita terms than the advanced economies over the coming five years.

“These economies are diverging rather than converging, going against the more benign trend of declining inequality between countries due to rapid growth in dynamic emerging markets such as China and India.”

Obstfeld also warned that debt-laden countries such as Sri Lanka should focus on fiscal consolidation now as it would provide fiscal space in the long term when tightening is necessary during a potential global downturn.