The International Monetary Fund (IMF) and the Government yesterday reached a fresh deal to further the cooperation between the two in enhancing prudent macroeconomic management.

The IMF said it had constructive discussions with the authorities in Colombo and during the Annual Meetings in Washington D.C.

In a statement issued from Washington, the IMF said the 2018 Budget should continue with fiscal consolidation supported by the new Inland Revenue Act. Furthermore the monetary policy should remain vigilant to pressures on inflation and credit growth. IMF also called for the upholding of the reform momentum as key to addressing vulnerabilities and sustaining inclusive growth.

In its statement the IMF said “The IMF team reached a staff-level agreement with the Sri Lankan authorities on the third review under an economic reform program supported by a three-year Extended Fund Facility (EFF) arrangement, subject to the completion of a prior action by the authorities and the approval of the IMF Executive Board.

“The Board is expected to consider Sri Lanka’s request for completion of the third review in December 2017, by which time the 2018 budget – consistent with the EFF-supported program – is expected to be submitted to Parliament as a prior action. Incorporating the new Inland Revenue Act, the 2018 budget should continue fiscal consolidation supported by stronger revenues.

The central bank should stand ready to head off pressures on inflation and credit growth, while continuing to enhance exchange rate flexibility.

“The authorities have been improving the country’s fiscal position and strengthened its international reserves, but more needs to be done in the area of SOE reforms. Upholding the reform momentum will be important for addressing fiscal and external imbalances and meeting the government’s ambitious social and development objectives. Renewed effort toward bolstering competitiveness, improving social protection programs, and boosting private sector development will be important for making growth more robust and inclusive.”

On Friday in Washington the IMF said helped by an upswing of growth in China, Japan and Korea, Asia remains the fastest growing region in the world with 5.6% growth in 2017 but countries with large debts and weak balance sheets such as Sri Lanka remain vulnerable.

“In Sri Lanka growth is expected to reach 4.7% in 2017 as buoyant construction and services offset weak and weather-affected agriculture,” IMF said. The projection of 4.7% is higher than the expectations of the Central Bank, which sees growth ending between 4%-4.5%. Sri Lanka’s government is also working to strengthen trade relations with top performer countries in the region and is in the midst of negotiating trade deals with India, Singapore and China.

Asia continues to lead the global economy with strong growth projected at 5.6% this year and 5.5% in 2018 while overall world growth will only be at 3.6%. The strength of many economies in the region provides an opportunity to pursue key reforms that can amplify and accelerate their beneficial effects, boosting living standards for all, said the IMF in its latest regional assessment.

In its flagship World Economic Outlook launched in Washington last week the IMF gave Sri Lanka an optimistic growth projection of 4.7% in 2017 and 4.8% in 2018 despite the Central Bank adjusting growth to be below 4.5% this year on prolonged natural disasters and lagging reforms.

IMF upgraded its global growth projections to 3.6% for this year and 3.7% for next—in both cases 0.1% above its previous forecasts, and well above 2016’s global growth rate of 3.2%, which was the lowest since the global financial crisis. 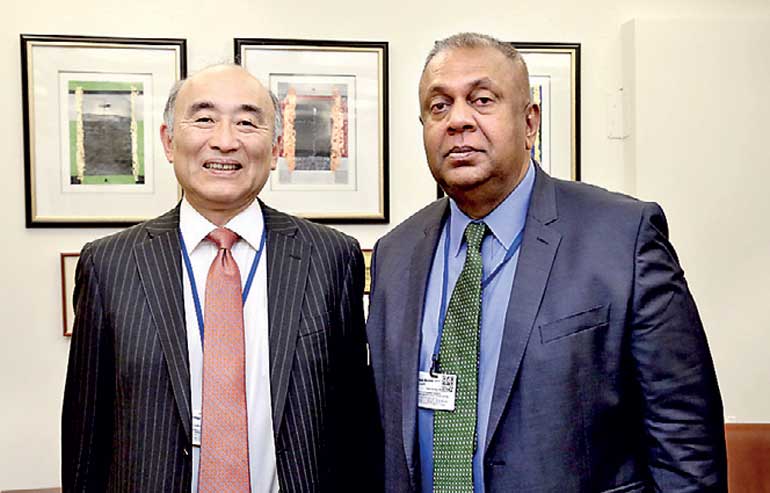 Minister of Finance and Mass Media Mangala Samaraweera while attending the WB/IMF annual meeting in Washington at the conclusion of the meeting called on Mitsuhiro Furusawa, Deputy Managing Director of the IMF, and held discussions on matters of mutual interest.

Furusawa joined the IMF after a distinguished career in the Japanese Government, including several senior positions in the Ministry of Finance in recent years. Immediately before coming to the Fund, he served as Special Advisor to Japanese Prime Minister Shinzo Abe and Special Advisor to the Minister of Finance. Among his recent ministry postings, Furusawa served as Vice Minister of Finance for International Affairs (2013-2014), Director-General of the Financial Bureau (2012-2013), and Senior Deputy Director-General of the International Bureau (2009-2010). Ministry of Finance and Mass Media SecretaryDr. R.H.S. Samaratunge and CBSL Governor Indrajith Coomaraswamy were also present at the occasion.